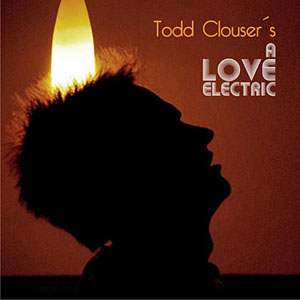 Musicians and painters from the US have long since been relocating to Mexico, hoping to deepen their art through immersion in a slower pace of life. Guitarist Todd Clouser is a recent emigré, who moved south in 2006. Back then, Mexico's drug war was just starting to heat up, and has grown more vicious with each passing year. By the end of the decade, it resembled a particularly nasty, full-blown civil war, with an appallingly high level of civilian attrition. What chance inner peace in such an environment?

The move seems to have worked for Clouser, however, who is based on the isolated Los Cabos peninsula. Clouser crossed the border to get away from the stresses of life with a US rock band (and, you suspect, reading between the lines, from its temptations) and to reconnect with music. A Love Electric is his third post-relocation album. It catches him in transformation from a straight ahead rock player to one embracing jazz—specifically, hard bop and the Rhodes-spiked crossover of pianist Herbie Hancock and trumpeter Miles Davis' early 1970s bands—and old-school rhythm & blues. Clouser still loves guitarist Jimi Hendrix, Led Zeppelin and what he calls "the total madness in noise," even if these days he's "more often listening to Charlie Parker, Monk or Wayne Shorter."

The album is a celebration of the rare groove, instrumental rock and funk of the 1970s, with an emphasis on crisp, Curtis Mayfield-like arrangements, and with plenty of space for improvisation. Clouser is accompanied by some heavy players: "downtown" trumpeter Steven Bernstein is prominently featured, as are Rhodes pianist Bryan Nichols and B3 organist Jason Craft. A third keyboard player, pianist Julio de la Cruz, romps joyously on the salsa-drenched "The Border At Pachacan." With the exception of Harry Nilsson's "One" and Leonard Cohen's "Hallelujah," all the tunes are Clouser originals.

The "jazziest" track is the fast-paced "Bobby White In The City," whose tricky theme is negotiated with panache by Clouser and Bernstein in tandem, and which includes Clouser's "jazziest" solo. Other highlights include the spacey "Jimena," at times reminiscent of Miles Davis' In A Silent Way (Columbia, 1969), and the blues-rockish "Brass Suite." The least memorable tracks are the two covers, presumably tunes with special significance to Clouser. In between, the grooves are good and uplifting.

Mexico, it seems, can still weave a restorative magic.