BY DAN BILAWSKY
August 4, 2015
Sign in to view read count 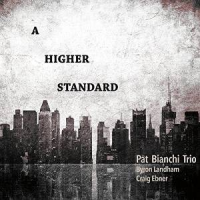 While Bianchi has drawn a lot of attention for his sideman work with such high profile artists as saxophone legend Lou Donaldson, guitar great Pat Martino, and heavy-hitter drummer Ralph Peterson, he has plenty to say when he's in the driver seat. Here, joined by two regulars in the organ trio world—guitarist Craig Ebner, who's played with organists Tony Monaco and Joey DeFrancesco, and Byron Landham, DeFrancesco's drummer of choice for more than two decades—Bianchi demonstrates that he's both a tradition-minded player and a risk-taker. He's not afraid to go at the music head-on, but he's also willing to peak into the outer limits from time to time, inspiring his band mates to do the same.

Bianchi and company swing in low gear on a Horace Silver favorite ("Blue Silver"), work contemplative angles ("Some Other Time"), move full steam ahead with fire ("Bohemia After Dark"), lightly prance and waltz on a Bill Evans standard ("Very Early"), crank the tempo and throw a metric twist into a John Coltrane classic ("Satellite"), and lay it down on a backbeat-driven, album-ending Stevie Wonder cover ("From The Bottom Of My Heart"). Across this entire program, Bianchi's many gifts come to the surface, Ebner's rounded sound and pointed delivery make a mark, and Landham's class and strength drive the music onward. This is one real-deal trio and it only takes one listen to this album to realize why Bianchi has become such a sought-after organist.

Without A Song; Blue Silver; So Many Stars; The Will Of Landham; Some Other Time; Bohemia After Dark; Very Early; Satellite; Blues Minus One.