By Karl Ackermann
December 31, 2015
Sign in to view read count 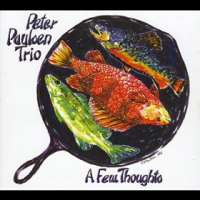 Bassist and composer Peter Paulsen is not reticent in his willingness to quote the bible. He specifically cites Matthew 13: 31-32 in stating an approach to creating music rooted in observation and execution through improvisation, communication and impulsiveness. He references a line regarding the mustard seed, saying it is..."the least of all the seeds; but when it is grown it is greater than the herbs and becomes a tree...." In that vein, we have A Few Thoughts, Paulsen's trio outing of covers and original tunes.

Paulsen's background in visual arts and music eventually led to his role as a teacher of double bass and jazz studies at West Chester University in Pennsylvania. He simultaneously performs with his own jazz quintet, the Harrisburg Symphony Orchestra, Allentown Symphony Orchestra and the Spoleto Festival Orchestra in Spoleto, Italy. His dedication to the musical education of youth led to his participation in master classes with saxophonist Gunnar Mossblad, the late Clark Terry and Russian trumpeter Valery Ponamerov.

The young pianist Tim Brey holds a recent degree in Jazz Piano from Temple University and he serves as the music director of the Philadelphia-based Jazz It Up Productions, an up and coming organization helping keep live jazz alive in that city's neighborhoods . Brey has worked with some local greats like bassist Mike Boone, the eclectic vocalist Joanna Pascale and trumpeter/educator Terell Stafford. Drummer and Cuban native François Zayas played with the National Symphonic Orchestra of Cuba for ten years and thanks to his simultaneous pursuit of jazz, landed a recent gig with saxophonist Steve Coleman.

A Few Thoughts contains two Bill Evans numbers, the familiar "Time Remembered" and lesser known "Comrade Conrad." Two Paulsen originals, a Chick Corea composition, Cole Porter and Francis Hopkinson (who happens to be a signer of the Declaration of Independence!) round out the program. Given the dominance of more time-travelled compositions on the CD, it wouldn't be a stretch to assume a generic piano trio outing but that's not at all the case.

Paulsen's arrangements put melody first and his strong sense of harmonic structure opens the door to some fine improvisations. A Few Thoughts is filled with musically solid grooves and excellent contributions from the players. Brey is an especially gifted pianist and accompanied by Paulsen and Zayas, the groups makes these old tunes fresh and modern. Both the covers and original compositions are satisfying and energetic.