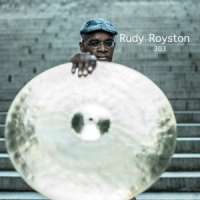 Drummer Rudy Royston's actions speak louder than his words. Royston oozed modesty, comfort and a touch of humor when he addressed the audience at a pre-release show for 303 during New York's Winter Jazzfest, but he gave off a much different sense of himself when he put sticks to skins during that same set. One minute he was delivering low-key, in-the-pocket grooves that had heads bobbing in the affirmative, and the next he was creating a percussive maelstrom that tore through the room. That's the Royston that the jazz community has come to love and that's the Royston that takes care of business on this album.

303—thus named for the area code in Royston's hometown of Denver, Colorado—is the drummer's leader debut, and it's been a long time coming. Royston's high profile work with saxophonist JD Allen, trumpeter Dave Douglas, and guitarist Bill Frisell has kept him plenty busy, but he thankfully still found some time to write, put together this stellar septet, and get into the studio to lay down some tracks.

With drums, two basses, two horns, guitar and piano at play on 303, things could easily get muddy; they could, but they don't. Royston's septet seems to expand and contract at will. All the colors are there, but they only reveal themselves at the opportune moment(s). The title track, which begins at peace before entering a danger zone, bears that out. Royston manages to use space, texture and time to his advantage whether refashioning Radiohead to his liking ("High And Dry"), painting dreamy scenarios with W.A. Mozart's music ("Ave Verum Corpus"), exploring the topic of soulful beauty ("Goodnight Kinyah"), or marrying mellow-and-earthy sounds with understated-and-sly grooves.

Royston's aggressive side doesn't come out often, but when it does, everybody better run for cover. He's not messing around on "Bownze" and his hook-up with guitarist Nir Felder on "Play On Words" is reminiscent of the connection between drummer Eric Harland and guitarist Julian Lage in Harland's Voyager outfit. Elsewhere, Royston shares the spotlight. He puts Nadje Noordhuis' beautiful flugelhorn in the foreground, lets saxophonist Jon Irabagon steal the show with his predictably unpredictable horn work, and gives pianist Sam Harris some space to do his thing. Bassists Mimi Jones and Yasushi Nakamura are less demonstrative than the rest of the crew, yet they play a more important part in many respects; they buttress the band and hold it all together with Royston.

Some of the drummer's pieces feel more like fragments than full-bodied compositions ("Miles To Go (Sunset Road)"), but this band manages to make more with less on those occasions. No single mood, idea or direction dominates on 303, and that's what's so refreshing. So many albums tend to be created with tunnel vision, but 303 is more of a panoramic construct.