By MARK SULLIVAN
January 8, 2017
Sign in to view read count 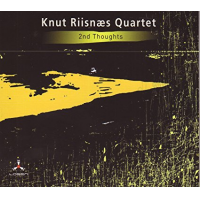 Contemporary Norwegian jazz has a well-deserved reputation for atmospheric beauty. Such players as saxophonists Jan Garbarek and Trygve Seim, trumpeters Nils Petter Molvaer and Arve Henriksen, and guitarists Terje Rypdal and Eivind Aarset (all associated with ECM Records) have attracted international attention for many years. But Norway also has strong roots in bebop, and the Knut Riisnæs Quartet provides solid proof.

It's certainly bop with a contemporary edge, as shown by the opener, the title tune by pianist Mulgrew Miller. It's an up-tempo Latin tune, which the band plays with a controlled abandon. Pianist Anders Aarum contributed "Petite Prix," another up-tempo tune with an intricate head. It's definitely bebop, but it could be a McCoy Tyner feature, or even one of Keith Jarrett's compositions for the Belonging quartet. Aarum turns in a fine solo, then lays out for the first part of Riisnæs' saxophone solo, which also spotlights the rhythm team of bassist Jens Fossum and drummer Tom Olstad.

"She Was Too Good To Me" is the first of the ballads, a Rogers and Hart standard (originally titled "He Was Too Good To Me") that brings out the lyrical side of the group. "Touching" is Riisnæs' only composition, an aptly named ballad feature for saxophone and piano. The final tracks were recorded live in Oslo. "Liten Vals" is a lovely waltz which opens with a brief bass solo. The finale is another beautiful ballad, the standard "Crazy She Calls Me."

Knut Riisnæs has a big tenor sound in the tradition of Sonny Rollins (he also credits Charlie Parker and John Coltrane as early influences). He has recorded and toured with modernists like John Scofield, Jon Christensen and Arild Andersen (appearing on 1975's ECM album Clouds In My Head). He and his quartet are straight-ahead and swinging all the way here, and it's a joy to hear. An unusual view of Norwegian jazz, as well as further evidence of the broad stylistic range of the Losen Records label.

2nd Thoughts; Petite Prix; She Was Too Goood To Me; Meet The Wickeds; Sniper; Touching; Liten vals; Crazy She Calls Me.