By Ian Patterson
April 4, 2012
Sign in to view read count 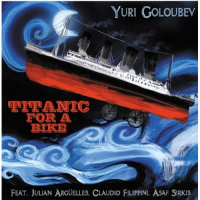 Titanic for a Bike

The old saying, "if you want a job done ask a busy person," certainly applies to Russian bassist Yuri Goloubev, one of the hardest-working musicians in jazz. When not touring with his own small ensembles, he's criss-crossing Europe in the trios of pianists Gwilym Simcock, Johnny Laws and Carlo Morena, or in the quartets of saxophonists Claudio Fasoli and Mattia Cigalini. And in the two years since Metafore Semplici (Universal, 2009)—his last outing as leader—he has also graced around twenty other recordings. Prodigious as well as prolific, Goloubev's hypnotising playing is freer here than on the more compositionally focused Metafore Semplici, though the same group adherences to melody and a softly voiced lyricism are cornerstones of the music on this adventurous, yet wholly accessible offering.

Perennial Goloubev collaborator, drummer Asaf Sirkis, once again lends his guile, dobbing lingering colors on the collective canvas. Sirkis' contribution is—for the most part—tremendously subtle, gliding furtively in and out of the mix. Vastly experienced soprano saxophonist Julian Arguelles brings strong melodic lines and flowing lyricism to almost half the cuts, and additional intuitive complicity, having previously recorded with Goloubev and Sirkis on pianist Carlo Magni's Notturni (Music Center, 2011). A striking difference between this recording and Metafore Semplici is Goloubev's more dominant presence as a soloist here. The liner notes state that he was searching for greater freedom by "treating the double bass rather as a wind instrument," and Goloubev certainly blows a storm; the set is peppered with his wonderfully creative interventions, with and without bow.

The final piece in the jigsaw is pianist Claudio Filippini, who leaves a lasting impression on compositions that exude individual expression. At 29, and with four CDs as leader to his name, the pianist from Pescara is no debutant. Though essentially a modernist, his naturally unfolding rhapsodic lines and constant melodic invention are evocative, though in no way imitative, of pianists Bill Evans and Bud Powell. Filippini's talent is notable, and with a little luck he will reach a much wider audience. Goloubev has been an admirer of Filippini's playing for some time, and must be delighted with the pianist's scintillating contribution to this recording.

A simple two-note piano motif ushers in Sirkis' composition "Sailing," and the sound soon swells with the arrival of Goloubev on bowed bass. There are few better exponents of arco, and his tone has the warm resonance of a cello. Formerly a classical bassist with the Moscow Soloists for 12 years, Goloubev's jazz recordings have used elements of contemporary classical composing—in particular harmonic—though on Titanic for a Bike the inevitable classical influence is most felt in his phrasing, a synthesis of the classical and jazz idioms. Downing his bow, the four-minute bass solo which follows is a killer. Melody drives Goloubev, and his playing has a lilting, folkloric quality. Filippini takes over the lead—with Sirkis slipping quietly in at the same time—and weaves a delightful course that is simplicity and grace personified. Bowed bass and the opening two-note piano motif return to close out this utterly seductive composition.

The loose compositional frameworks mean that no fixed patterns are readily discernible on tracks like "Philosophy" and "Well Seasoned Waltz," other than the shared characteristic of a series of interconnected solos which gently immerse the listener. The playing is free, though the individual roles are carefully defined. Sirkis and Filippini steer the group rhythmically, with Sirkis displaying a deft percussive accent that at times could lull a baby to sleep, notably on "How We Were." Argüelles hoists the melodic mast, and his solos have a spiraling beauty, whilst Goloubev and Filippini largely construct the tunes' narrative flow.

Elegance and melody, however, permeate the music, even at its most lively. On "Bagatelle 2," Argüelles stretches out with soulful exuberance, buoyed by Sirkis' most animated playing of the set. On "Elmau Revisited"—a notable exercise in counterpoint—the individual voices swirl around each other like currents. Empathy in the playing is ever-present too; Argüelles and Filippini's voices entwine in a hypnotic rising-falling exchange on "Bill Gates Among Us," another great tune. The piano-trio number "Love Stories" illustrates Goloubev's ability to comp beautifully in totally free mode. On the same track, Filippini's uncluttered solo reveals a sublime touch and an inherently emotive voice. The solo bass number, "Titanic on the Bike," is a pleasing oddity, germinating with an urgent, King Crimson-esque bowed riff, over which Goloubev charts the famous theme from the James Cameron movie. 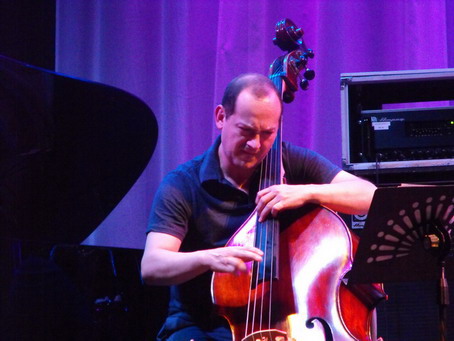 In the end, Goloubev—on arco—and Filippini combine in a beguiling duo-interpretation of Jimmy Hughes/Dorothy Fields' song, "Don't Blame Me." It's perhaps appropriate that these two musicians should take the final bow, as their playing throughout this record is simply wonderful. Titanic for a Bike is Goloubev's most satisfying recording to date, and goes a long way towards elevating him to the ranks of jazz's premier bass improvisers. It also states the case most persuasively, for Goloubev as a modern composer and leader of note. Highly recommended.

Tracks: Sailing; Philosophy; Well Seasoned Waltz; How We Were (re: The Way We Were); Titanic on the Bike; Love Stories (re: Love Story); Elmau Revisited; Bill Gates Amongst Us; Bagatelle 2; Don't Blame Me.

Sailing; Philosophy; Well Seasoned Waltz; How We were (re: The Way We Were); Titanic on the Bike; Love Stories (re: Love Story); Elmau Revisited; Bill Gates Amongst Us; Bagatelle 2; Don’t Blame Me.