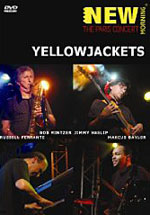 A group that has, on occasion, ventured along the fine line between contemporary jazz and that of the smoother variety, Yellowjackets has always been a performing band. Now approaching its 30th anniversary as a collective, it's the group's eighth year with a consistent line-up that includes, in addition to co-founders Russell Ferrante (keyboards) and Jimmy Haslip (bass), long-timer Bob Mintzer (saxophone and EWI - Electronic Wind Instrument) and relative newcomer Marcus Baylor (drums).

Some of Yellowjacket's best records have been live ones like its first with the current line-up, 2002's Mint Jam (Heads Up), demonstrating that its music may sound easy on the ears, but not only is there much more going on under the hood, but Yellowjackets is, quiet simply, one smoking live act, capable of stunning virtuosity, boiling over energy and plenty of attitude when it comes to groove. New Morning - The Paris Concert, filmed in high definition during a 2008 performance at the now-legendary French venue, wastes no time in making that clear.

The quartet may be electric, but its roots in the tradition remain clear, especially since Mintzer joined the group in 1990 for Greenhouse (GRP, 1991). Yellowjackets even dips right back to that album for a brief look at Ferrante's "Freedomland," a high octane tune that's a seamless segue from the hard-swinging "With These Hands," and features an impressive a capella solo from Mintzer that's swings just as hard, even as the group comes in and the tune takes a turn into more energetic contemporary territory. Haslip's frightening 16th note groove and Baylor's powerful and flexible playing drive a tough head that's more powerful than the original, despite its brevity. Weather Report has always been a reference point for the group, but Yellowjackets absolutely does not follow the late keyboardist and bandleader Joe Zawinul's "everybody solos and nobody solos" aesthetic; there's too much overt virtuosity on display here, but never in excess and always in service of the group's compelling original material.

Even the gospel-inflected "Even Song," first heard on Run For Your Life (GRP, 1994) and co-written by Ferrante, Haslip and Mintzer, is funkier and more alive than the original—largely because, as good as Baylor's predecessor Will Kennedy was, the direction of the label at the time was towards a more radio-friendly vibe. Here, everyone goes for it in a way that's still accessible, but, at the same time, far more muscular. Mintzer's solo is supported by Baylor's flexible backbeat, while Haslip continues to amaze as a focused soloist who's as impressive for his way with a melody as he is with his ability to create one approaching the speed of light.

The group is just as impressive when it hits modal territory. There's something reminiscent of the late Michael Brecker in Mintzer's "Aha," but the Yellowjackets tenorist possesses his own voice, with his own signature that's at once less piercingly visceral but still undeniably potent. Ferrante uses his synthesizer judiciously throughout the set, but on this tune it's acoustic all the way, with a McCoy Tyner-inflected solo that's filled with big block chords and lithe right hand runs.

The material covers the group's career since Mintzer joined, with particular emphasis on Blue Hats (Warner Bros., 1997), culling three of the show's 12 songs from a disc that was part of a concerted effort to move towards a leaner acoustic sound. While still appealing to the core constituent of fans who were attracted to the group's electrified energy, Blue Hats remains a career high point that found Yellowjackets beginning to draw in fans of more straight-ahead jazz. The group proves capable of elegant strength on Mintzer's softly swinging ballad "Prayer for Peace," but aims again for Weather Report territory on "With These Hands," a knotty tune with shifting meters that features a fiercely swinging piano solo from Ferrante that, bolstered responsively by Haslip and Baylor, is one of many highlights in this 90 minute concert. Ferrante's "Downtown," first heard on an earlier live CD, Live Wires (GRP, 1992), recalls late-Jaco Pastorius era Weather Report albums like Night Passage (Columbia, 1980) and Weather Report (Columbia, 1982), but Ferrante's synth orchestration over this fiery swinger is sparer, with greater emphasis on acoustic piano, as Mintzer's solo weaves through the changes with unerring accuracy and in-the-moment compositional strength.

A brief bonus feature, the eight minute-long Bonus Sketches, provides a brief glimpse into as Yellowjackets soundcheck, including some interview footage with Haslip, who provides some historical context for the group's 28-year career.

Closing the set with the same tune that closed the live Mint Jam—the Ferrante/Kennedy/Mintzer cooker, "Evening News"—everyone gets a chance to solo on this eight-minute workout, but Haslip and Baylor are the standouts, trading fours towards the song's end in a remarkable display of chops and high-speed melodicism. Yellowjackets may still battle a reputation in some camps from years past that, even then, was unfairly dismissive—and, largely, from those who didn't take the time to really check out what the group was capable of. New Morning - The Paris Concert is proof that it's possible to be both accessible and substantial, from a group that continues to deliver the goods night-after-night with finesse, power and spontaneity.