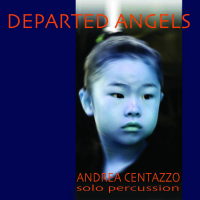 Intuition plays the dominant role in the interaction between percussionist Andrea Centazzo and seven guitar improvisers on this set of collaborations recorded over a wide span of time. Centazzo plays in duo and trio settings, occasionally adding another voice. What transpires is an explosion of processes that take the art of invention to a new high.

Centazzo has been an active musician and composer for over 25 years, covering a wide and impressive range of styles including opera, symphonies, multi-media presentations (where he knots his compositions with video) and improvised music. Derek Bailey, that seminal presence in improvised music, was the first improvising guitarist Centazzo played with. The two short improvisations from 1977, "Bace 1" and "Bace 2," total just over five minutes and are a study in unstructured cohesion. Bailey is content to let Centazzo spur a whirlwind of percussion as he plays an almost discernible refrain. He is upfront on the latter, twisting a melody into several shapes, scraping chords, bending his strings and opening the strings to make his guitar sound like a banjo.

Davey Williams is an American improvising guitarist with a bag full of inventions across his fretboard. Centazzo switches to electronics and percussion for "Wice One" and "Wice Two." Shards of electronics, squeaks, drones, and shifting time and trajectory characterize the first. The two expand the parameters on the second, taking an open and clear dialogue into a plethora of movements. Flattened notes and feedback find their companion in the clatter of percussion. Space wafts in and condenses into thick texture as they read each other perfectly from the parallel paths they are creating. Volatility, then, is a constant fixture, as it is on "Andala," which brings in LaDonna Smith (violin, vocals). Smith fires a volley of slides on the violin making the three-way action more ardent as they ratchet up the tension.

The ambience becomes a bit lighter thanks to Eugene Chadbourne and his sense of humor. He and Centazzo recorded "Chacen Two" and Chacen Three" in Milan in 1980, and "Chacen One" in Los Angeles in 2009. Time has not rusted the interaction; the understanding between them is close and Chadbourne shows that he can flit from a deep, twisted groove to an airy flight of fancy on the turn of a note. With Centazzo meeting his deliciously skewed vision with aplomb, this is a top notch venture.

Centazzo not only brings out all his instruments on "Kacezo One," "Kacezo Two" and "Kacezo Three," but also Henry Kaiser and Roberto Zorzi, the only time he has two guitarists along. Depth charged by feedback, rock phrases, walls of sound, vivid colors on the cymbals, a dance beat and a Scottish air fed on rock music, this triumvirate goes every which way but loose. It is a triumph of creativity, for the way music can be stimulated into awesome images.

Imagination can mine a rich lore and it certainly does so here. No partnership is without its own sense of place as Centazzo finds his soul mates in forging electrifying soundscapes.