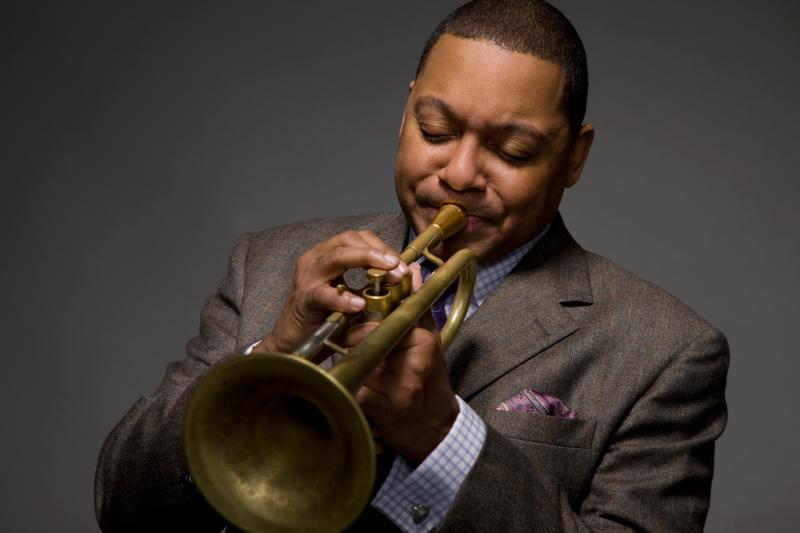 BY ANDREW J. SAMMUT
May 12, 2011
Sign in to view read count
Wynton Marsalis
Harvard Sanders Theatre
Cambridge, MA
April 28, 2011
A capacity crowd filled Harvard University's Sanders Theatre for "Music as Metaphor," featuring trumpeter, composer and Artistic Director for Jazz at Lincoln Center Wynton Marsalis. Thursday night's event launched a two-year series of programs by Marsalis at Harvard entitled "Hidden in Plain View: Meanings in American Music," organized by university President Drew Faust as part of an expansion of the arts at the nation's oldest institution of higher education. Billed as a "lecture and performance," Marsalis effortlessly fused verbal and musical lessons the way only a performer can.

His thoughtful, poetic insights into music history and cultural context wove in and out of energetic illustrations by a septet of Walter Blanding (soprano and tenor saxophones and clarinet), James Chirillo (guitar and banjo), Carlos Henriquez (bass), Ali Jackson (drums), Dan Nimmer (piano), Mark OConnor (violin) and the leader/lecturer's trumpet. The band flexed their creative chops through gospel, rhythm and blues, traditional melodies and of course a fair share of jazz, with country, bluegrass and folk flying off the fingerboard of O'Connor's gracefully hot fiddle. From humorous snippets of "Here Comes the Bride" illustrating how a few notes speak volumes to our soul, to Jackson demonstrating the lineage between American and African beats, the group's impeccable technique and swing became all the more powerful as an instrument of Mr. Marsalis' spirited pedagogy.

Marsalis is known as the unofficial ambassador of jazz, and an outspoken advocate for more traditional styles of the music. Yet his indisputable knowledge and love for the very concept of American music was at the heart of his over three-hour class. Unfolding the narrative of American music through clever wit, down-home humor and magisterial explication (with just a hint of the Southern preacher calling his flock home), Marsalis spoke earnestly about the idea of "sonic metaphors" in music, surviving through generations and transcending stylistic differences. He referenced Duke Ellington, Bob Wills, Mahalia Jackson, Judy Garland, and dozens of other American artists, as well as African slaves and European immigrants whose creativity helped shape how the world hears and appreciates music. Any divisions within the arts grew distant throughout an evening that blurred lines between genres and eras, not to mention music and ethics.

When the band burned through "Sweet Georgia Brown," Marsalis illustrated the musical concept of underlying chord changes, but also spoke to the social idea of a basic framework we all agree to, even as we remain free to question and challenge that framework. Marsalis' connection between the Bill of Rights and the bandstand sounded downright intuitive by the close of the program. He also reminded the audience that jazz was integrated before baseball (and well before the rest of the country). Politics and art don't always jell, but tapping feet and clapping hands across the auditorium were clearly on board with this particular message.