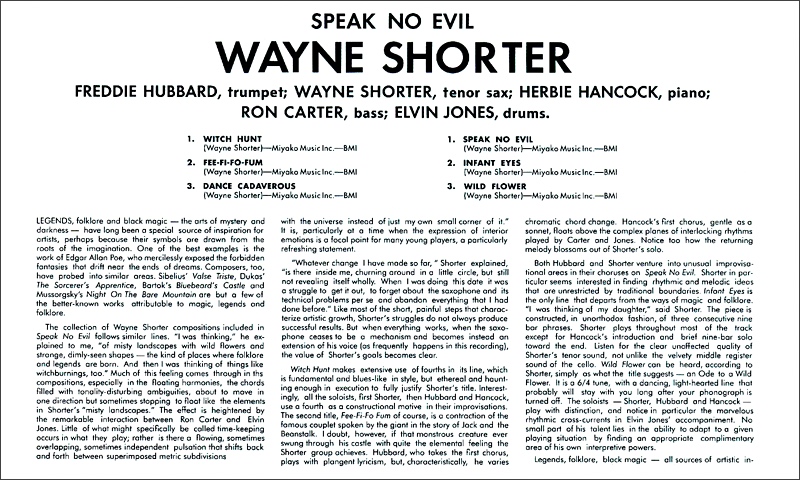 BY JAKOB BAEKGAARD
September 19, 2016
Sign in to view read count

The inclusion of liner notes in albums is a crucial part of the ceremony of choice. Reading the notes puts you in the right frame of mind. It confirms your choice and prepares the experience of listening.

It is said that we live in The Information Age, but perhaps, it would be more correct to say that we live in the Age of Too Much Information. If there is something you are looking for, you can often find it on the Internet, but the question is whether it is quantity rather than quality. Of course, in spite of increasing commercialization and an endless pile of trash, there is also much valuable information to be found on the Internet. All About Jazz, this very website, is in fact a prime example of the idea of enlightenment where sources of knowledge connected to a certain topic (jazz) are gathered. Wikipedia is another example.

In many ways, the Internet has been a blessing for the curious music fan. It has never been easier to access and listen to music from around the world, but with all this music around comes a need for limitation, information and concentration. As a music listener, and especially as a music reviewer, you sometimes get the feeling that there is endless stream of music floating around and sometimes it becomes too much. It is quite simple. Even if all the food in the world is available to you, you can only eat a limited amount a day. The same thing with music, you need to make a choice.

The inclusion of liner notes in albums is a crucial part of the ceremony of choice. Reading the notes puts you in the right frame of mind. It confirms your choice and prepares the experience of listening. This preparation has different aspects:

1. Biography and historical context. The notes could provide a short biography of the artist, simply answering the question: Who is he or she? This makes the listening experience more personal. The musician is not just a name on the cover, but a human of flesh and blood. This is especially useful when the artist is not a familiar name. The short biography could also be a snapshot of the artist's life. Where is he/she right now? The notes could also include historical context. Is the artist a part of a specific tradition or scene?

2. Artist's reflections. Some of the most interesting notes are the ones where the writer has taken the time to interview the artist or, perhaps, the artist writes his/her own thoughts about the music. What are the stories behind the music? What is the artist trying to do aesthetically? What kind of choices were made before and during the recording process? Getting the answers to these questions allows the reader to be involved in the process of creation and be a fly on the wall.

3. Musical analysis. An analysis of the music, a so-called track-by-track analysis, forms the basis of many liner notes. Some are very technical, others very factual and others again poetical. There a many approaches and one is not necessarily more valid than the other, but it should be kept in mind that the receiver is the general listener and not a trained musicologist. Some people say that describing music is impossible, the cliché quote is that: "it is like dancing around architecture." It might be that it is difficult, but it is not a valid reason for not trying.

4. Writer's reflections. Because a musical analysis is so difficult, it often becomes a writer's perception of the music. Some writers are more successful with this approach than others, but every liner note is, in some sense, subjective and the trick of the writer is to make his/her experience of the music as clear as possible and then you can agree or not as a listener. No matter what, it is nice to have a qualified opinion of the music.

5. Enthusiasm. It might seem strange to include enthusiasm, especially considering the fact that some people think liner notes are filled with unnecessary hyperbole, purple prose and empty rhetoric. Personally, I like an enthusiastic writer, as long as the praise is genuine. To me it is worse to encounter a writer who does not seem to like the music he or she is writing about. I don't mind the writer telling me the music is good and if he or she can qualify the statement it is even better. It puts the listener in a positive frame of mind. Would you rather be told that you are going to eat "a salad" or that you're going to eat "a fresh, crispy, green salad that has grown in a little garden." I know what I prefer and which salad I would like to eat.

6. Marking the album as a work of art. Liner notes are a signal that here is a work of art that is worth your time. By now, liner notes can be found in albums associated with any genre: country, disco, rock, jazz, you name it. However, one genre where it is the norm is classical music, and it is no coincidence. Classical music is a genre that is highly aware of its status as high art.

With all the advantages of liner notes, one can wonder why they are an endangered species. There are many reasons for this. The most important are money and time. It costs money if you hire a writer and it costs time if you compose them yourself. It could also be an aesthetic choice. Some labels and artists feel that their work should not be disturbed by words, which of course is fair enough. Another reason could be laziness. The argument goes that all the information you need is on the Internet anyway, so why even bother with liner notes when you can find biographical information and reviews on the Internet.

This brings us to the difference between genres. Liner notes are related to press releases and reviews, but they are not the same. A well-written press release is nice to have and a useful marketing tool, but, as the name says, it is only meant for the press, and the words are quickly forgotten again because they are not an integral part of the work, but meant to sell it and highlight the album in the moment. Sometimes you find examples of someone using their liner notes as a press release and this is not ideal. The two genres should be separated because they do different things.

Reviews, especially good reviews, sometimes live up to the standard of well-written liner notes. The best example I can think of is All About Jazz's own John Kelman whose archive of reviews is a treasure trove of knowledgeable musical analysis and in-depth contextualization. However, reviews do seldom include artist interviews or statements, simply because it is primarily a writer's evaluation of a certain work. Furthermore, reviews are also potentially critical in a way that liner notes are not. However, critical reviews have become increasingly rare, as most writers understandably like to spend time writing about what they like instead of pointing out faults and failures.

With all this in mind, it should be clear that the music itself is what is most important. As a reviewer, I have written about many albums without liner notes and that has not stopped me from liking the music, but I do believe that liner notes can enhance the experience of listening and, if well-written, they give a positive first impression, an air of seriousness and care.

Perhaps the future will see new digital liner notes with inclusion of video and footage and perhaps there will be even more conventional digital booklets and PDF-files to supplement downloads and streaming. Right now, some companies just keep churning out product with no attention to detail, historical context or information, but thankfully, many others out there care and do a wonderful job with annotation and packaging. Of course, as with any kind of writing, there are both good and bad liner notes, and there is also the question of taste and preference of style. Here follows a top five with some of my own favorite liner note writers, but the list could be much longer. Do you have your own favorite liner notes? Feel free to post your recommendations as a comment.

1. John Kelman. Kelman has written countless excellent reviews at All About Jazz that qualify as top-shelf liner notes, but he has also written regular liner notes. Sample his work: Read Kelman's insightful notes for the recent Peter Erskine Trio box on ECM: As It was (ECM, 2016)

2. Loren Schoenberg is another jazz writer who really brings the music to life. Reading his notes for the Mosaic box of saxophonist Coleman Hawkins' classic recordings was an experience of total immersion. Sample his work: Read Schoenberg's detailed notes for Classic Coleman Hawkins Sessions 1922-1947 (Mosaic Records, 2012)

3. Rob Bowman. Bowman writes primarily about rock and soul music (Stax Records, Lou Reed, The Band) and his liner notes are impressive, with a lot of work put into conducting interviews. Sample his work: Read Bowman's notes for the reissue of the Band's self-titled release The Band (Capitol, 2000)

4. Bob Blumenthal. Blumenthal has done a lot of great writing, but I have a soft spot for his appreciations of classic Blue Note albums in the RVG-series of Blue Note CD-reissues. Having the music, the original liner notes and Blumenthal's new look at a particular album is pure Blue Note pleasure. The icing on the Blue Note cake? Reading the wonderful My Blue Note Obsession column on All About Jazz by Marc Davis. Sample Blumenthal's work: So many to choose from, but a random choice: the reissue of Herbie Hancock's Maiden Voyage (Blue Note/Capitol, 1999). A perfect album and the inclusion of the original notes and Blumenthal's new appreciation makes it even better.

5. Charles Waring. Waring writes many of the detailed liner notes for the exemplary jazz reissues on BGO. He is unprejudiced and has a fine balance between background/biographical information and musical analysis. Sample his work: The music on Argentinian saxophonist Gato Barbieri's albums Gato...Para Los Amigos (CBS, 1984), Qué Pasa (Columbia/Sony, 1997) and Che Corazón (Columbia/Sony, 1999) gathered in a nice BGO-package (BGO, 2013). The music is deemed to smooth by some people, but Waring soberly gets into the heart of it without prejudice.