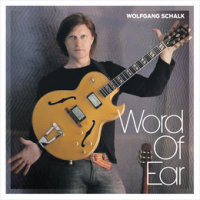 As if to quietly utter "enough with talking about the music...," guitarist Wolfgang Schalk gets to the heart of the matter with Word of Ear and lets his playing speak loud and clear. This is his sixth recording as a leader and he continues to reveal expressive phrasing and piercing solos on hollow body electric and acoustic guitars.

With strong and modern post-bop vibe chops à la Pat Martino and Kevin Eubanks, the set is bookended by "Midnight Prayers," a solo improvisation conceived after a late night recording session which sets a tone that is contemplative and searching. The remaining tracks though, contain a mix of adrenaline ("Eating Melodies"), picturesque balladry found in the title, and a refreshing pieces like the up-tempo cover of Thelonious Monk's "Round Midnight."

"Written Tomorrow" and "Blues 'n' Roll" shout more vociferously and demonstrate the band and Schalk's abilities. The former finds the guitarist slicing through quick runs on acoustic guitar within a rousing tempo. The latter is a funky bluesy groove, with Schalk killing it on electric guitar, thoroughly working the changes as Whitty delivers a nasty solo on electric keyboards. A quote from the great Wes Montgomery—one of Schalk's influences--- sums up the vibe: "regardless of what you play, the biggest thing is keeping the feel going." Which is exactly what Word of Ear accomplishes.