BY HRAYR ATTARIAN
September 1, 2012
Sign in to view read count 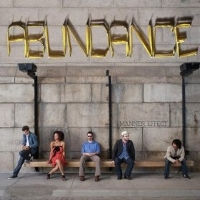 Manner Effect is not merely an energetic group consisting of a vocalist backed by a four- piece band, but a quintet with two frontline instruments and a rhythm section. This is primarily due to Ali Steriopoulos's utilization of her amazing vocal cords as a wind instrument, and in her delivery of songs in the tradition of such adventurous performers as Flora Purim and Ursula Duduziak.

Showcasing his lyricism on acoustic bass on Charles' hypnotic ballad "Longing For," Roberts steps into the spotlight and interacts with the others, creating intricate, romantically influenced harmonies.

Percussionist Joshua Davis is Roberts' partner in laying down complex, sometimes angular, and always compelling grooves. Whether on the fusion-esque "Passing Time," the breezy "The Way it Was," or the funky "X Marks The Spot," Davis' cymbals, thumps and strikes propel the cadence forward and serve as the foundation on which the songs are built.

This effervescent set of varying styles, including covers by Michael Jackson and Antonio Carlos Jobim, is still firmly rooted in jazz, albeit on the light side of the spectrum. Its frothy and cool sound provides a highly enjoyable experience that may not have much intellectual heft but it does maintain interest, and the handsomely designed disc, with its companion DVD, is a treat for the eyes and ears.