By Glenn Astarita
September 1, 2012
Sign in to view read count 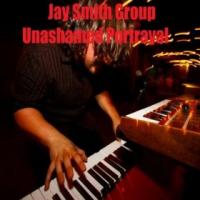 California-based keyboardist Jay Smith's worldly musical views radiate mightily, as he borrows from the past and reformulates a refreshingly modern vibe, spanning jazz-fusion, blues-rock and more. He also injects panache into the proceedings and garners top-notch support, while fusing a coalition of memorable melodies with a rather ferocious improvisational element. The keyboardist incorporates a vastly entertaining subsystem with penetrating frameworks amid various climactically oriented rhythmical drivers.

Smith is a catalyst and colorist, and weaves around blistering solo spots by guitarist Andre Bush and the horn players. The keyboardist also merges a touch of playful insanity into a few segments. On "Elephant Shoes," the musicians kick it off with a Ravel "Bolero" motif, segueing into a regal thematic opus spiced with a brawny shuffle groove, complemented by a Latin-jazz vamp and catchy licks. Smith is no softy, however, as he reformulates the primary theme with rolling waves of fluent single-note clusters, performed on piano.

Bush's soaring, extended-note hard-rock blues spots add a sense of antiquity into certain aspects of the production. and Smith's busy yet productive mode of attack is underscored by unadulterated passion. The band conveys quite a bit of impact via weighty choruses, blaring horns parts and edgy funk breakouts. On "The End," Smith and Bush kick out the jams to contrast an album largely modeled with sustainable works, thought-provoking arrangements and harmonically attractive developments. They pull out the proverbial stops with an assertive 'tude on this well- rounded outing. Smith obviously didn't slap this album together without putting a great deal of forethought into the overall game plan.

Alegna; Elephant Shoes; Static; Break; Alegna-Trio; Past; Something for Cara; The End.