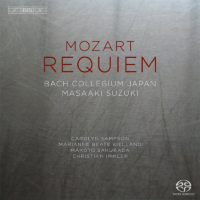 For some listeners and critics Masaaki Suzuki and the Bach Collegium Japan is an acquired taste. I have found no quibble with Maestro Suzuki and his fine band and chorus. They have recently completed a complete survey of Bach Cantatas, as well as a majority of Bach's major orchestral works. Suzuki himself has recorded the buck of Bach's keyboard music (on harpsichord, of course) and all of these endeavors bear an undeniable stamp of Ton Koopman, with whom Suzuki studied. No one-dimensional performer, Suzuki has also addressed the keyboard music of Dietrich Buxtehude and the orchestral music of Monteverdi. Suzuki and company's reading of Handel's Messiah (BIS, 1997) is exceptional. The maestro is a man for all Baroque seasons.

Well, almost. Offered here is a scintillating Mozart Requiem in a new completion by Bach Collegium Japan organist and harpsichordist Masato Suzuki, commissioned by the orchestra. Where John Eliot Gardiner, upon completion of his Bach Cantata Pilgrimage, returned to Beethoven twenty years after his groundbreaking recordings with his Orchestre Révolutionnaire et Romantique, Suzuki stays chronologically closer to home with Mozart. And What Mozart it is.

We are not lacking for superb performances of Requiem. Mozart's masterpiece was left as a mere shell by its composer at his death most likely from the renal sequelae of rheumatic fever he has suffered as a child. The mass was completed by Mozart protégé, Franz Xaver Süssmayr with input by Joseph von Eybler. This new completion is not to be considered definitive, according to Masato Suzuki. It is an attept to remain true to the composer by the assimilation of Sussmayr's completion with the adoption of Eybler's sequential. Suzuki includes Mozart's "Amen Fugue," originally discovered as a single page sketch in Mozart's hand in the Berlin State Library in 1960. Its addition enriches the mass offering a capable closure to the piece. Also included is a performance of Vesperae Solennes de Confessore, K. 339, which bears many similarities to the Requiem composed several years later. Also provided is al alternate reading of the "Tuba mirum" from the "Sequentia."

The performance and its sonics are absolute perfection. Suzuki moderates his tempi, achieving a seamless consistency throughout the performance, never dragging or sounding rushed. The strings and brass of the BCJ are evenly and brightly captured. The soloists are exceptional, in particular, soprano Carolyn Sampson, whose tone is creamy and precise. This is a fresh look at a staid and revered piece of music, treated here with both respect and boldness.