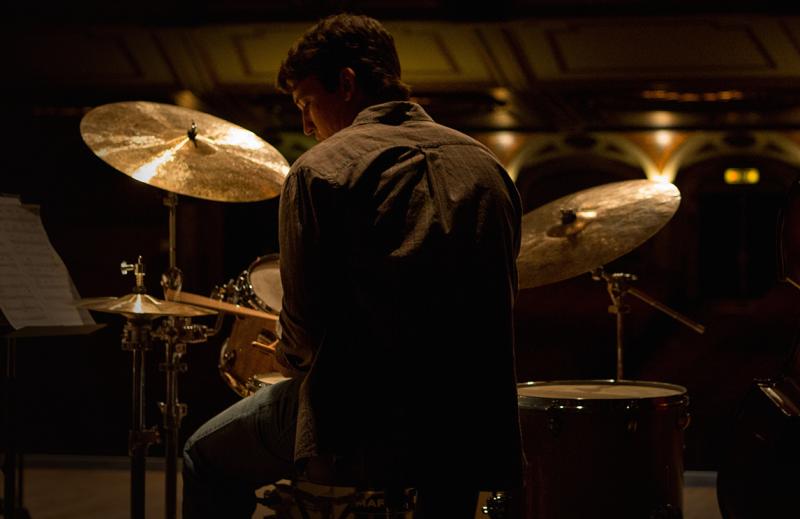 BY STEVEN HAHN
December 25, 2014
Sign in to view read count
Jazz lovers, while always attuned to the possibility of their cherished art form entering the media mainstream, are also equally filled with dread when it occasionally does happen. Inevitably we end up consoling ourselves with a revived career (Dexter Gordon—Bird) or an outstanding performance (James Carter, et al.—Kansas City) in lieu of an actual believable plot or an authentic resemblance to any known jazz milieu. In Whiplash, we have both deficiencies illustrated.

Seriously, are there any real life sons-a-bitches known to rival Terrence Fletcher, (J.K. Simmons) as the terror-inducing, sadistically manipulative mentor to earnest young musicians in his top band at Shaffer Conservatory (a Juilliard-ish analog)? Buddy Rich was a legendary ranter; Stan Getz an unmitigated bastard, but did either one deliberately set out to sabotage the musicians they depended on? Particularly as a strategy to make them try harder? I don't think so. And then to pile one further impossibility onto the accumulating improbabilities, the script (writer/director Damien Chazelle) has Fletcher deceiving his worshipful whipping-boy drummer (Miles Teller) into playing the wrong chart at a public performance (the JVC Festival, no less), heedless of any consequences to his own reputation. Could that ever happen? The Mingus at the Town Hall fiasco remains legendary in jazz lore but never approached such calculation.

Leaving the realm of psychologically unbelievable characters, Whiplash delivers us into a jazz world that bears no resemblance to reality. I kept waiting for the flashing disclaimer that said: "Caution!, ambitious young jazz musicians. The following scenes do not depict actual events. Jazz big bands no longer exist and you will not find a career playing in one." Sure, the big band is a staple in college music programs—ensemble skills and all that—but mostly to cram 16-20 musicians at a time into one band. In the real world they are no more than supplementary gigs these days; opportunities for friends to run through classic charts on Monday nights when nothing else is going on. We all know about the large ensemble exceptions that labor on thanks to the dedication of composer/leaders who depend more on grants than paying gigs—Maria Schneider, John Hollenbeck, et al. Even the relatively recent heyday of Mel Lewis, Toshiko Akiyoshi, Lionel Hampton, Buddy Rich and Gil Evans seems like ancient history. The only people making money from big bands these days are the jazz education programs and the composers/arrangers who write the music for them. So when the script has Fletcher name-dropping Lincoln Center as some achievable career ambition to his avid students, one can't help expelling a juicy spit-take. Is that gratuitous placement for the benefit of the jazz innocent in the audience who remembers Wynton Marsalis from a 60 Minutes appearance? Otherwise, why bother even attempting to anchor this anachronistic world to some contemporary name.

Whiplash is so ridiculous it hardly merits being called a disappointment. And don't get me started on the blood-spattered drum set. If I want a preposterous jazz movie, I'll watch Jack Webb (Pete Kelly's Blues) fake-play trumpet.