Nancy Erickson: While Strolling Through the Park 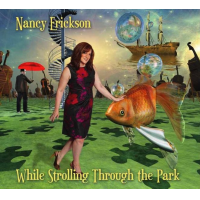 Listening to "New Year's Eve," Nancy Erickson's original composition opening her third recording, While Strolling Through the Park, makes me recall the songwriting of Dr. Louise Van Aarsen (Destiny (Self Produced, 2012)). Both sport a very contemporary and adult vision of falling in love, having a family and simply living. That is refreshing in that this songwriting lack the grandiloquent melodrama of the Great American Songbook. It is music for everyone. Erickson's "Summer Day" and "The Whippoorwill Song" echo this "make-it-real" simplicity.

Erickson is a Seattle native who has managed to surround herself with the Origin Arts musician stable and other Northwest Coast stalwarts. She beautifully duets with bassist/vocalists Clipper Anderson on "I Just Dropped by to Say Hello," the two taking a languid beach stroll with the Feller-Ward chestnut. Pianist Darin Clendenin classes the place up with just a standard rhythm section. Top notch takes on "Perdido" (at deliberate tempo...slowly revealing the genius of Juan Tizol) and a rocking-rapid "That Old Black Magic." Erickson is smart in her song choice and arrangements. Erickson's superb "The Whippoorwill Song" and Edith Piaf's "La Vie en Rose" close is fulfilling and most satisfying offering.

New Year’s Eve; While Strolling Through the Park; If Music Be the Food of Love; Perdido; Prelude to a Kiss; Summer Day; I Just Dropped By to Say Hello; That Old Black Magic; The Whippoorwill Song; La Vie en Rose.

Title: While Strolling Through the Park | Year Released: 2016 | Record Label: Self Produced