BY DOUG COLLETTE
January 23, 2016
Sign in to view read count 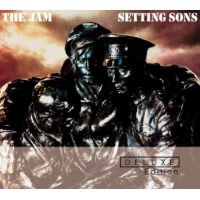 The Jam's muscular musicianship is a direct reflection of titular leader Paul Weller's compositions for the trio, a symbiosis never more vivid than on the ambitious likes of Setting Sons. And this double-disc edition of the British band's fourth album reaffirms the blinding speed by which the trio progressed from being earnest young musicians paying tribute to an earlier time-the Mods of the Sixties by way of homage to the Who-to a mature ensemble whose studio work embroidered upon the intricacy and visceral power of their live performances.

The concept of this album, left largely implicit as its recording evolved, nevertheless begs its expansion. With concurrent singles accompanying the remastered record on disc one of the package and a complete performance from London's Roundhouse in the year of the album's release in 1979, Setting Sons Deluxe Edition ultimately makes the powerful statement, transcending its provincial setting, that Weller originally hoped it would.

Content in the enclosed booklet, including memorabilia and photos as well as the original album graphics, capture a place in time to which the pivotal songs of Settings Sons hearken. The nervy undercurrent of "Thick As Thieves" camouflages the nagging doubts carrying over from adolescence to young adulthood as clearly as the mix of guitars, bass and drums (plus vocals often in harmony both rough and sweet) had become more pronounced since the Jam had begun recording. Likewise, "The Eton Rifles" " The Butterfly Collector" and "Strange Town," even though not part of the original narrative. all speak to a theme of insularity the likes of which Weller applies with knowing attitude.

And there's an overriding unity within his bond with bassist Bruce Foxton and drummer Rick Buckler (and by extension, producer Vic Coppersmith-Heaven, ), as evident in recording as playing a concert, that's mirrored in his subjects and his audience (as so obvious on the Roundhouse show on disc two). The inclusion of post-album recordings such as "Going Underground" and, even more so, "Dreams of Children," speak to Weller's continued willingness to move outside the confines of the trio as the Jam did the more heavily-produced likes of the orchestration that appears on the album version of Foxton's own "Smithers-Jones" (not to mention the latter's playing of cello on "Little Boy Soldiers").

The live recording punctuates the evolution of the Jam in a breathless succession of pithy takes on a selection of the (at the time) new material, along with other well-known—and quickly recognized—tunes such as the title tracks from previous albums, "All Mod Cons" and "The Modern World." Contrary to the pure joy and abandon at the heart of the cover of Motown's Martha and the Vandellas' "Heat Wave" that closed the original song sequence of Setting Sons, Weller, Foxton and Buckler bring continuity to their discography with the intensely purposeful playing of this show, rendering it a memorable microcosm of their career.

CD: 1 Girl On The Phone; Thick As Thieves; Private Hell; Little Boy Soldiers; Wasteland; Burning Sky; Smithers-Jones; Saturday's Kids; The Eton Rifles; Heat Wave; Strange Town; Butterfly Collector; When You're Young; Smithers-Jones; The Eton Rifles; See-Saw; Going Underground; Dreams Of Children. CD 2: Girl On The Phone; To Be Someone (Didn't We Have A Nice Time); It's Too Bad; Burning Sky; Away From The Numbers; Smithers-Jones; The Modern World; Mr. Clean; The Butterfly Collector; Private Hell; Thick As Thieves; When You're Young; Strange Town; Eton Rifles; Down In The Tube Station At Midnight; Saturday's Kids; All Mod Cons; David Watts.