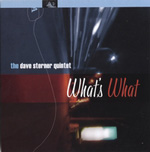 A member of Ernie Krivda's Fat Tuesday Big Band, alto saxophonist David Sterner has been a committed jazz artist on the Cleveland, Ohio scene since the mid '90s. He's led the quartet heard on What's What for the past several years now, a fact that figures prominently in the development and preparation of the group's maiden voyage. Refreshing in its stance, which avoids the more iconic sounds of the bebop tradition, Sterner's influences come from a decidedly more soulful perspective. Cannonball Adderley seems to be a recognizable element in the framework of Sterner's approach, although there's also a strong tendency towards the funkier leanings of Hank Crawford, David Sanborn and Chris Hunter.

Sterner's originals are particularly strong and happily make up most of the program. Together with tenor man Chris Burge, our two front-line partners speak as one and easily negotiate some slippery passages, such as the slurs and bends of the melody line to "The Jive Song. Roger Friedman utilizes a Fender Rhodes to lay down vintage grooves on several cuts; Kurt Felgemaker's electric bass anchors the bottom end. Sterner's alto is at its most melodic on the ebullient "Waltz for Pop, while his fiery statement on "What Was gives the strongest indication of his ties to players such as Sanborn and Crawford.

By contrast with his original material, Sterner and company's renditions of the four standards here are far less interesting. In fact, one could argue that it might have been beneficial to forego them altogether in favor of extending some of the solos on a few of the shorter numbers. Regardless, What's What is a strong statement that stands apart from many of the self-produced releases that pass as mainstream jazz these days.

Track Listing: The Jive Song; Slick Willy; A Lazy Day; What Was; Waltz for Pop; The Lucky Ones; That's All; JS 4 Fun; Don't Get Around Much Anymore; S.P. Jones; But Not for Me; Split Kick.