By JOHN KELMAN
January 26, 2007
Sign in to view read count
It's all too rare that an artist appears, seemingly out of nowhere, fully matured and with a distinctively personal musical conception. While guitarist Nguyên Lê—Parisian born of Vietnamese parents—might argue that his true voice didn't emerge until he released the seminal Tales From Vietnam (ACT, 1996), the recent remastered reissue of his first two albums as a leader, Miracles and Zanzibar, suggests that Lê may be too hard on himself.

It's also not necessarily true that you are defined by the company you keep. Plenty of young artists—especially if they're backed by a label with some cash—hire known names for their first recording as a leader. Still, while these big guns are rarely less than accomplished, it's easy enough to tell when they're simply "doing the session," as opposed to finding themselves deeply committed to the music. And it's rarer still to find better-known musicians maintaining associations with a younger artist once the session is over.

What's most remarkable about Lê's first two recordings—one representing a literal first meeting, the other demonstrating the benefit of having been on tour prior to recording—is not just how cohesive the two groups are, but that they represent the beginnings of musical friendships that continue to this day. Pianist Art Lande, who is on both sessions, recently rejoined Lê on Walking On The Tiger's Tail (ACT, 2005). That release also featured Oregon co-founder and woodwind multi- instrumentalist, Paul McCandless, who also appears on one of Lê's early sessions. Bassist Marc Johnson and drummer Peter Erskine, from Lê's first release, would work again with Lê on Three Trios (ACT, 1997), while Erskine would continue the relationship, forming the collaborative E_L_B trio with Lê and releasing its self-titled ACT album in 2001.

That so many of these artists clearly heard something in Lê at such an early stage makes these reissues long overdue. 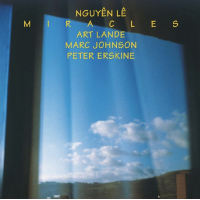 While Homescape (ACT, 2006) is the best example of Lê's integration of technology into his musical landscape, it's a characteristic that's equally clear from the opening notes of the title track to Miracles. While the importance of interplay and interaction within the quartet is a fundamental, Lê is one of only a handful of guitarists who are able organically to incorporate programming, guitar synthesis and sequencing.

Miracles may have been a first meeting between Lê, Lande, Johnson and Erskine, but you'd never know it. The material ranges from the backbeat-driven title track and the swinging "? (Question Mark)," to the temporal elasticity of "The Odd Game" and the elegantly melancholic "20 Fingers." The quartet tracks are broken up by occasional duets with Lande, ranging from completely acoustic to heavily layered electronic soundscapes. Lê's ethnic heritage and its influence on his overall musical concept would not become fully realized until Tales From Vietnam, but "Cerf Volant," a miniature featuring Lê on the zither-like danh tranh, and the equally brief "Haïku," are clear harbingers of things to come.

Listening to Lande's work on Miracles, it's unfathomable that he's never achieved more widespread fame. He sticks to acoustic piano on these sessions, but his ability to work comfortably in Lê's more expansive aural framework makes him the perfect choice, though not a surprising one when one considers the stylistic diversity he demonstrated on ECM recordings including Red Lanta (1974), Rubisa Patrol (1976) and Skylight (1982).

There is, in fact, a certain vibe to Miracles that's not out-of-context with the German label's aesthetic. Stylistically broad, sonically diverse and, despite Lê's programming and use of processing, natural and filled with room to breathe, ECM is clearly one component of Lê's musical makeup. With Johnson and Erskine on board, it's hard to miss another reference point for Lê—Bass Desires (ECM, 1986), especially on tracks like the episodic and multifaceted "Miss One."

Lê's distinctly Fender-ish tone means there's a certain twang evident, even when he adopts a warm and clean tone as he does during the first half of the brooding "Eyeland." But Lê is also capable of an edgier, fusion-like sound. Following Lande's focused and more clearly jazz- centric solo on "? (Question Mark)," Lê takes a rockier stance with a densely overdriven tone that's equal parts space, sustain, bebop language and swooping whammy-bar bends.

That Lê had already assimilated a range of influences, from Allan Holdsworth and Terje Rypdal to Pat Metheny and John Abercrombie, into a recognizable voice so early in his career makes Miracles an album that may have been a beginning, but was hardly a humble one. 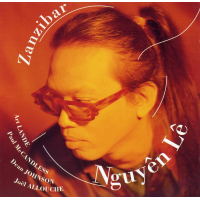 Lê's second album upped the ante by expanding the quartet—with bassist Dean Johnson and drummer Joel Allouche replacing Johnson and Erskine—to a quintet featuring Paul McCandless. McCandless' oboe and English horn bring a different complexion, with parts of Zanzibar suggestive of how Oregon might sound were its guitarist to focus on an electric rather than acoustic instrument. Recorded following a two-week tour, it's also an even more unified record than Miracles, where the element of surprise is replaced by a more firmly cohesive sense of purpose.

Lê is often considered to be a fusion guitarist, and the reckless abandon of his solo on the fiery "Urbi" would certainly support that thought. But while he's capable of rapid-fire phrases and screaming bends, there's never a sense of excess. Even on the somewhat Metheny-esque "Isoar," Lê's clean-toned solo runs the gamut from the languid to the intense, building with purposeful intent and never resorting to pyrotechnics merely for the sake of it. There are few fusion guitarists who could switch gears to the Lê-Lande-McCandless trio of "Omero," where McCandless' soaring soprano saxophone solo is one of many high points.

Lê's writing continues to evolve, as does his approach to sound. The atmospheric "Sarugaku," at just less than two minutes, continues to suggest an interest in Lê's cultural roots through his use of distinctly Oriental-sounding samples. Lê's astute synthesized sound choices mean that there's nothing that sounds the slightest bit dated here (or on Miracles).

They wouldn't come together on record until Vince Mendoza's Sketches (ACT, 1994), but Lê and the innovative composer/arranger already seemed to share much in common. The broad intervallic arpeggios and detailed counterpoint that define "Lupi Pilu" come from a similar space as Mendoza's writing at the time on albums including Start Here (World Pacific, 1990) and Instructions Inside (Manhattan, 1991). Improvisational space may be one part of Lê's musical approach, but finely honed writing is an equal component.

Lê also possesses an ability to tailor his material to the strengths of his group. The detailed yet lyrical theme to "Nomaco" takes place in the context of constant change that provides a complex foundation for Lê's thread-through-a-needle ability to improvise over them, but when he hands to reins over to Lande, the rhythm section shifts seamlessly to a more defined sense of swing.

As much as Zanzibar is a logical progression from Miracles it's also an album with a different complexion. Some artists gradually and inexorably evolve a singular concept, but Nguyên Lê is an artist who rarely stands still for long. His subsequent discography demonstrates an even more voracious appetite for diverse styles and contexts, but these welcome reissues prove it was there right from the start.