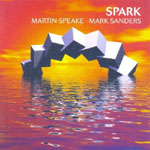 British altoist Martin Speake has made a career out of doing things differently. With Exploring Standards (33 Records, 2003) he adopted a decidedly minimalist and miniaturist approach to jazz standards. Charlie Parker (Jazzizit, 2005) presented a modernistic alternative to most of the tributes recorded for the 50th anniversary year of the legendary saxophonist's death. So it should come as no surprise that Spark puts a decidedly personal spin on free improvisation.

The idea of an entire album of free improvisation featuring only saxophone and percussion might be enough to scare away listeners used to more conventional contexts. Speake, however, has always been a focused and lyrical player. Spark may be defined by spontaneity and exploration, but it's also remarkably accessible. The album is dedicated to guitarist Derek Bailey and saxophonist Elton Dean, who passed away in 2005 and 2006, respectively. But while Speake is no less adventurous than these two icons of free jazz, he is more direct and less abstruse.

Mark Sanders, a percussionist with wide-open ears, is a strong match for Speake. He's a loose player who is as quick to respond as to direct on this series of nine improvisations which range anywhere from three and a half minutes to just over seven. That the entire 46 minutes are culled from a single session lasting an hour, with no plans and no discussion, speaks to the comfort level they clearly shared in the studio when the recording too place back in 2001.

Speake makes occasional use of extended techniques including multiphonics, but for the most part he retains the warm tone that's been a career-defining characteristic. He has never been one to overplay, and while he clearly possesses the technique to achieve almost any goal he sets his mind to, even in this extemporaneous setting, he's primarily concerned with developing ideas to give each piece a sense of logically completeness.

There's no lack of fire on this recording, but both Speake and Sanders avoid angularity and jagged edges. Sanders may be highly interactive throughout, but like Speake, he's more concerned with a shared concept, resulting in an approach that's freewheeling in the most understated of ways, without ever losing sight of essential forward motion.

While the term "spontaneous composition"is often overused and abused, it's a fitting description for this music. The late Steve Lacy is quoted in the liner notes, saying "The difference between composition and improvisation is that in composition you have all the time you want to decide what to say in fifteen seconds, while in improvisation you have fifteen seconds." Spark demonstrates, in the most approachable of fashions, that it's possible to create music in real time that feels like it comes from much greater consideration and forethought.