Soothsayers: We Are Many 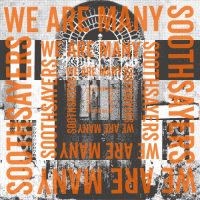 Straddling jazz, Afrobeat, conscious reggae and dub, South London's Soothsayers is among the top ten must-see attractions on Britain's club circuit (on hold for the duration). Soothsayers can make the lame not merely walk, but dance. We Are Many is the band's ninth studio album and it is a superbly well-realized production, up there with an earlier landmark, Tangled Roots (Red Earth, 2009).

The lineup on We Are Many is led, as always, by Soothsayers' founders and composers, trumpeter Robin Hopcraft and saxophonist and clarinetist Idris Rahman (brother of pianist Zoe Rahman). The two horn players also double as vocalists, and live and on record they generally team up with other singers. This time it is Julia Biel, who is a star in her own right. Biel sings on seven of We Are Many's eleven tracks and the three-part harmonies between her, Hopcraft and Rahman evoke classic Jamaican vocal groups such as Culture, The Mighty Diamonds and The Heptones.

The other two protagonists are Kwake Bass and Wu-Lu, who co-produce with Hopcraft and Rahman and add drums, keyboards, synths, bass and guitars. Bass and Wu-Lu produced singer Zara McFarlane's venturesome homage to her Jamaican heritage, 2020's Songs Of An Unknown Tongue (Brownswood), which featured Hopcraft and Rahman on a couple of tracks. The countenance of one man brighteneth another, iron sharpeneth iron, as Joseph Hill wrote.

We Are Many also includes a Brazilian strand. Some of the albums' basic tracks were recorded in Sao Paulo in 2019, while Hopcraft and Rahman were on a visit to the country. Bassist Victor Rice organized a session with local musicians including drummer Bruno Buarque and guitarist Joao Erbetta. The album was later completed in London.

Along with cultural inclusivity, another defining feature of Soothsayers' music is its engagement with societal issues. The new album takes on the fascists and carpet baggers Trump and Bolsanaro, the lying little Englanders who manipulated Britain's Brexit referendum, the poison that accompanies social media, the scandal of homelessness in Europe's wealthiest country, and more. Never descending into simplistic agitprop, Hopcraft and Rahman's lyrics are powerful and poetic and the album closes with a typically upbeat and positive message in "We Won't Lose Hope." Lotta continua. And keep having fun, too.

Rat Race; Love And Unity; We Are Many; Move In Silence; One Step Away; No Sacrifice; Rolling (Em Barra Do Sahy); Slave; Light The Way; Hands In The Ground; We Won’t Lose Hope.