John Abercrombie Quartet: Wait Till You See Her

By JOHN KELMAN
September 1, 2009
Sign in to view read count 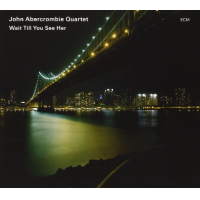 The beauty of working with the same people long-term is it's possible to evolve a cohesive ensemble sound, while still retaining its singular group voice. Guitarist John Abercrombie has been working with violinist Mark Feldman since Open Land (ECM, 1999), but it was when he recruited bassist Marc Johnson and drummer Joey Baron for Cat 'n' Mouse (ECM, 2002), that his idea of a string-centric, chamber jazz quartet came into being. On subsequent releases, most recently The Third Quartet (ECM, 2007), the quartet became increasingly adept at realizing Abercrombie's forward-thinking traditionalism, where freedom is couched in spare writing, and remarkable in-the-moment spontaneous creation leaves a profound impression of preconceived form from the ether.

It's encouraging to find Wait Till You See Her continuing Abercrombie's string-driven quartet although, with young up-and-comer Thomas Morgan replacing Johnson, the group's overall concept remains intact but understandably assumes a slightly different complexion—the result of Morgan's sparer, slightly more muscular Scott LaFaro-like flexibility. The LaFaro reference is key because, as much as Abercrombie has always been influenced by the impressionistic conversational approach of Bill Evans' trio aesthetic (with whom LaFaro played until his untimely death in 1961), Wait Till You See Her's first impression is, despite its unequivocally modernistic bent, one of channeling the late pianist's spirit.

Evans' spirit, though, and not his letter, with the possible exception of the group's nuanced reading of Richard Rodgers' often-recorded title track, where Baron eschews direct pulse for something more implicit, more atmospheric. Wait Till You See Her is largely even darker, more brooding and introspective than the previous quartet discs, with "Trio," its hardest-swinging track. As the title suggests, it's a three- piece, with Feldman sitting out and leaving Abercrombie's warm, reverb-drenched melodism, supported with firm strength by Morgan and Baron, the primary voice.

"Anniversary Waltz" is as compelling as anything Abercrombie has written; a harmonically ambiguous piece revolving around a melody that manages to be both oblique and memorable. The interaction between Abercrombie and Feldman has become so intuitive that they intertwine around its melody, even as the guitarist simultaneously delivers soft chordal accompaniment. With a solo so understated yet strong in ideation, Abercrombie continues to be one of jazz's most inventive guitarists—a player immediately recognizable, yet never reliant on signature phrases or techniques to assert his voice. Feldman's solo is equally definitive here and on the Middle Eastern-tinged "Chic of Araby."

Feldman also proves himself a truly orchestral player on the firm three-over- four (an Evans signature) "Out Of Towner," expanding the group's breadth with great virtuosity and unparalleled creativity. Morgan's staggered lyricism is equally impressive, while Baron is at his most expressionistic. With by-now expected diversity and an unequalled combination of liberation and attention to minimalist compositional detail, Wait Till You See Her is another strong outing from a quartet that, even with one personnel change, just keeps getting better and better.

Sad Song; Line-Up; Wait Till You See Her; Trio; I've Overlooked Before; Anniversary Waltz; Out Of Towner; Chic of Araby.