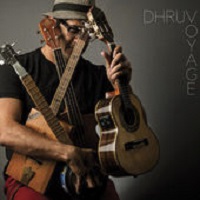 It's been a few years since Berklee-trained guitarist/composer Dhruv Ghanekar last crossed AAJ's radar. That was at the Borneo Jazz Festival 2011, where his quartet powered through a jazz-fusion set of the highest order. For his second recording as leader the Mumbai guitarist—who has performed with sarangi maestro Sultan Khan, Zakir Hussain and Scott Kinsey—shows off his hefty compositional strengths. With Etienne Mbappe, Trilok Gurtu, Ranjit Barot and Karim Ziad heading an all-star cast, Dhruv explores the nexus of Indian and African music in a fusion that's alternatively as intoxicating as Mumbai bustle and as soothing as a Ganges sunset.

Much of the music is filtered through a jazz-fusion prism, no more so than on "Zawi D" where the babble of a market scene and Mbappe's vocorder pay clear tribute to Joe Zawinul/Weather Report. Bassist Linley Marthe and Ziad's propulsive rhythms underpin snaking ensemble and individual lines, with soprano saxophonist Carl Clements and then Dhruv stretching out. A riveting soloist, Druv's vocabulary draws on traditions stemming from John McLaughlin and Indian classical music in a heady, melodious fusion. Throughout Voyage Dhruv doubles on keyboards and his six-string chops are released sparingly, according to the music's demands.