Jazz multi-keyboardist Scott Kinsey from Owosso, Michigan began studying piano at an early age and almost instantly became interested in the synthesizer. After graduating from Boston's Berklee College of Music in 1991, Scott moved to Los Angeles and was soon touring the world with the critically acclaimed electric jazz group “Tribal Tech”.

Making the hip even hipper, you can also hear Scott’s keyboards backing up the biggest movie stars of today in the soundtracks to the films “Ocean’s Eleven”, “Code 46”, “Stander”, “Confessions of a Dangerous Mind”, “Brown Sugar”, “Analyze That!” and 2005’s hugely successful “Ocean’s Twelve”. Upcoming soundtracks include Bob Odenkirk's "You are going to Prison" and Steven Soderbergh's "The Good German".

Scott, as a true jazz synthesist, has always utilized the newest technology and is always striving to reach the improvisational potential of the synthesizer.

The Critics on Kinsey: “Kinsey doesn’t just blow incredible solos or lay down perfect voicings; with the sounds he dials in, every note is a three dimensional adventure.” - Ernie Rideout, Keyboard Magazine, January ‘99.

“Tribal Tech's secret weapon remains keyboardist Kinsey, who not only adds harmonic meat with his richly provocative choral voicings, hip comping and counterpoint melodies but also stands as one of the most creative and unpredictable synth soloists around. He is always looking to push the envelope.” - Bill Milkowski ‘2000 “

..."Kinsey, perhaps in compensation for his inhuman chops quotient, has now established himself as an innovator for incorporating the human element, in the form of sampled vocals�"pitched, unpitched, sung, spoken or screamed�"into his custom-programmed sonic voice.” - Phil DiPietro, All About Jazz.com, 2004

Scott Kinsey's Kinesthetics makes it to #3 in Critcs Picks

From: The Landscape
By Scott Kinsey

From: ARCeology: The Music of MSM...
By Scott Kinsey

From: Trust
By Scott Kinsey

From: Adjustments
By Scott Kinsey

From: The Missing Song
By Scott Kinsey

From: Variations Of Relevance
By Scott Kinsey

From: ARC Trio
By Scott Kinsey 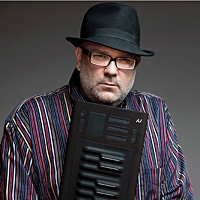 All About Jazz musician pages are maintained by musicians, publicists and trusted members like you. Interested? Tell us why you would like to improve the Mahavishnu Orchestra musician page.