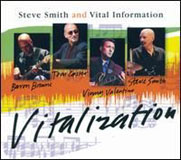 Drummer Steve Smith's flagship group, Vital Information, approaches the 25-year mark with Vitalization. Keyboardist Tom Coster has been a member since 1987, working with Smith on other projects since the mid-1970s. With bassist Baron Browne holding down the bottom end since 1997; newcomer Vinny Valentino (replacing longstanding guitarist Frank Gambale) represents the first change to the core group in a decade.

Some might miss Gambale's aggressive fusion energy, but Vital Information has been gradually evolving towards the cleaner sound heard on Come On In (Tone Center, 2004). That George Benson was Valentino's mentor will come as no surprise based on the fleet-fingered yet soulful soloing heard here. Valentino's similarly warm yet funky tone (honed with Hammond B3 trios in his native Washington, DC) also possesses some of Pat Martino's darker hue and way of building solos on repetitive motifs.

Vitalization may groove with American-centric funk, swing, and fire, but Smith has been studying Indian rhythms and konnakol technique in recent years. He and guest Peter Lockett layer this vocal percussion over the up-tempo funk of "Interwoven Rhythms—Synchronous" and the greasier groove of "Interwoven Rhythm—Dialogue," where Smith and Lockett alternate between unison and call-and-response.

Ignoring for a moment, the strong collaborative writing that makes up half of the album's dozen original tracks, Valentino emerges as a writing force that's just as noteworthy as his playing. He's a diverse tunesmith, ranging from the fiery funk of "The Trouble With" (one of four tracks with guest saxophonist Bill Evans), the modern mainstream of "J Ben Jazz" which is as much a feature for the underappreciated Browne as it is for Valentino, to "Positano," an elegant closer that finds Coster substituting accordion for the organ and electric piano tones that dominates the majority of the set.

Vital Information has evolved considerably over the years with no album sounding quite like its predecessor, though the lineage is always clear. There's no shortage of controlled energy (check out the guitar/drums duo intro to Valentino's feature on "The Trouble With") and even a hint of real fusion towards the end of "Seven and a Half," where Smith's powerful solo leads into a Jan Hammer-esque synth spot for Coster. But Vitalization's biggest strength is Vital Information's ever-increasing maturity—due in equal parts, to the longevity of the Smith-Coster-Browne triumvirate and Valentino's infusion of a fresh perspective.