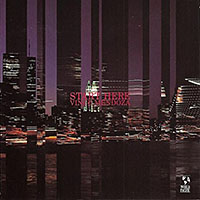 In the fall of 1990, I was visiting Amsterdam for four days between business engagements in other European countries and, as usual, the first order of the day was to scope out a good music store. Luckily, there was one within walking distance of the hotel, and amongst the goodies I bought that day was Vince Mendoza's second recording as a leader, first to be released outside of Japan ... and today's Rediscovery: Start Here.

I'd already begun to encounter Mendoza's name as a composer of no small promise on albums by Peter Erskine, John Abercrombie, Gary Burton and Michael Brecker—pretty damn good credentials for a composer/arranger who was relatively fresh out of school and some experience in Los Angeles as a scorer for film and television—and so his name already bore significant weight. Start Here's lineup largely alternated between two star-studded groups: one, with John Scofield, Bob Mintzer, Jim Beard and Erskine; the other, featuring guitarist Ralph Towner, pianist Marc Cohen (soon to change his name to Marc Copland), bassist Gary Peacock and, again, Erskine. As intrigued as I was by a full album of Mendoza's music, his choice of musicians is what turned the record from curiosity to "must have."

With both ensembles, Mendoza often added a variety of instruments ranging from reeds (in addition to Mintzer, Joe Lovano and Lawrence Feldman), horns and string to synths (often played/programmed by Mendoza) and EVI (Electronic Valve Instrument, played here by Judd Miller). The ensembles were also broken down, at times, into smaller subsets as on "Save the World," where Mendoza's synth-programmed arpeggios creates a foundation over which Lovano, Towner and Erskine can layer their collective improvisational forays.

The result? An album of remarkable diversity that still speaks with Mendoza's singular voice, from the knottily buoyant and harmonically ambiguous opener, "Babe of the Day," and "Elder Wings"—which begins with Mendoza's darker- hued synths and Feldman and Peacock solos that ultimately turn more joyous for Towner's nylon-string guitar solo—to the elegiac French horn, bass trombone and tuba driven "Angelicus," still, nearly a quarter century later, one of Mendoza's most beautiful compositions.

There's plenty of solo space, but always within the context of Mendoza's information-rich writing. These are not quick heads that open up into soloing; instead, they are detailed compositions where improvisational elements are just another integrated component of Mendoza's overall approach.

Mendoza would subsequently go on to become an composer and/or arranger of choice for everyone from bassist Jimmy Haslip—a full half of whose Arc (GRP, 1993) seemed like a continuation of Start Here and its equally impressive 1991 follow-up, Instructions Inside (EMI-Manhattan), and featured one of the composer's best pieces of writing (and best Scofield solos) ever, "Orange Guitars"—Joe Zawinul and Charlie Haden to Joni Mitchell, Mary Chapin Carpenter and Björk.

But it all began with Start Here, a most impressive leader debut and one well worth revisiting and, with its multitude of musical layers, rediscovering.