Various Artists: Into The Light: Music of Korea V

By Ian Patterson
December 29, 2014
Sign in to view read count 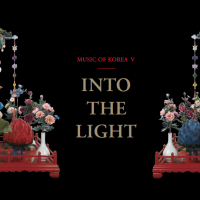 The Korean Arts Management Service (KAMS) has put a great deal of energy and resources into promoting the Korean performance arts abroad in the past nine years. Music is one of its biggest exports, with traditional and contemporary Korean music increasingly finding its way into the World Music, jazz and numerous arts festivals of the world.

The crossroads where jazz and contemporary improvised music meet was presented in the excellent third volume of Into The Light: Traditional Music and Korean Jazz (KAMS, 2010), an essential compilation for anyone interested in the cutting edge of Korean improvised music.

Into The Light V serves up a CD/DVD double package of thirteen artists whose styles cover the traditional and modern range of the folkloric music spectrum, with zithers, flute, percussion and shamanistic vocals rubbing shoulders with piano, acoustic guitar and ambient electronics. The music is diverse but—like all the music in this ongoing series—uniformly impressive.

Improvisational virtuosity defines Park Kyung-so's solo gayageum performance ""Dung-tta," a slow-burning bluesy exploration punctuated by emotive peaks. A captivating soloist, Kyung-so can be found in the more contemporary group Ensemble Aura and the jazz-fusion band Oriental Express. Essentially a modernist, Kyung-so's progressive approach to this most traditional of instruments is illustrated on her exhilaratingly outré performance captured on the DVD.

Bulsechul offers a fresh take on tradition with "Puneori." Park Jae-hun on ajaeng (bowed zither), Lee Joon on gayageum and Bae Jung-chan on janggu improvise on what is to all intents and purposes a blues, with Jae-hun interpreting the melody of a pansori vocal. Two of the most haunting tracks of the collection—both solo pieces—are the elegiac "Jeongseon Arirang," played by Gamin Hyosun Kang on the piri (double reed bamboo oboe) and "Yeomyangchun, Revisited" by Juris Kuns on the haegeum (two-stringed fiddle) and accompanied by dreamy computer-generated pulses.

The Ensemble Sinawi's "Donghae Rhapsody" blends percussive, sanjo and pansori traditions in a fairly heady brew with Jeong Song-hee's jazzy piano lines and Lee Bong-guen's vocal improvisations—part shamanistic cry, part scat—lending a contemporary edge to the gayageum, ajaeng and janggu combo. Impassioned and flowing, Ensemble Sinawi's fusion certainly draws from tradition but is not bound by it. Likewise, the new wave group Noreum Machi takes tradition as its launching pad, with the gong-driven "Tajing" stemming from the rhythmic patterns of shamanistic ritual. An oboe, plaintive then strident improvises over the gongs, and whilst hypnotic, this song only begins to hint at the dizzying percussive-cum-dance charges that have made Noreum Machi a crowd pleaser at festivals the world over.

Kwak Soo-eun & Gayageum Ensemble La_on G has expanded not only the body of the gayageum from its traditional twelve strings to fully twenty five but has also stretched the repertoire of an instrument that dates back to the sixth century. Kwak Soo-eun's episodic though flowing improvisation—accompanied by percussionist Shin Chang-ryeol—is seductive and unpredictable, reveling in small gestures and bold cadenzas alike. Her performance on the DVD accompanied by a cellist is equally compelling though the static camera work does little to shed light onto her technique.

Singer Yun Jin-chul closes the compilation with a suitably intense slice of pansori, with janggu accompaniment and cries punctuating and encouraging his heartfelt narrative. "Saetaryeong" ("Bird Song") is an aria from the epic tale Jeokbyeokga, yet despite the pastoral title and occasional bird-song imitations Jin-Chul's is a dramatic performance full of passionate blues and smoldering gravitas.

The range and depth of music contained on Into The Light: Music of Korea V underlines the vitality of Korean folk music, whether firmly rooted in tradition or whether displaying colors of a more contemporary hue. This CD/DVD compilation makes an excellent addition to the ongoing Into the Light series, all five releases of which are available free for download on i Tunes.