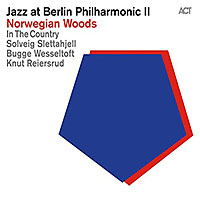 One night, six Norwegian artists—three of them together in a group for a decade. Such ideas can look great on paper, but turn out less than inspiring in reality. Fortunately, beyond the individual talents involved, there's been enough interconnectivity between singer Solveig Slettahjell, keyboardist Bugge Wesseltoft, guitarist Knut Reiersrud and the members of In The Country—keyboardist Morten Qvenild, bassist Roger Arntzen and drummer Paal Hausken—that Norwegian Woods-Jazz at the Berlin Philharmonic II doesn't just work...it soars.

Slettahjell—bringing a very personal vision to both her own music and her many interpretations of songwriters ranging from Cole Porter to Tom Waits by using super slow tempos—has collaborated with Qvenild for more than ten years, both in the Slow Motion Orchestra last heard on 2010's Tarpan Seasons (Universal Norway) and in the intimate duo setting of Antologie (Universal Norway, 2011). Wesseltoft has, in addition to his own work interpreting the jazz canon in a similarly slow fashion on Songs (2012), both produced and played on Reiersrud's understated (and overlooked) 2010 gem Gitar—like Songs, on the keyboardist's Jazzland label—while In the Country has honed a most specific voice and chemistry on five recordings including Losing Stones, Collecting Bones (Rune Grammofon, 2007), from which the plaintive, quietly majestic and wordless vocal-driven "Can I Come Home Now" was culled for this very special, one-time concert at Berlin's Philharmonic Hall on March 13, 2014.

There are spotlight moments for everyone but, beyond an unexpected by perhaps not so surprising chemistry built atop the intrinsic empathy shared by In the Country's three members, the biggest revelation has to be Reiersrud, if only because he's the member of the group who's yet to really go beyond the borders of his homeland, where he is much better known for a growing discography that, in addition to Gitar, includes Blå Korala (Kirkelig Kulturverksted, 1991)—a duo session that, with church organist Ivar Kleive, is considered a classic Norwegian recording for its blending of old-world traditionalism and new world contemporary blues guitar artistry. It's also an album that includes the dramatically interpreted Norwegian traditional "Ingen Vinner Frem Til Den Evige Ro," which opens em>Norwegian Woods' nine-song, hour-long set. Here, however, with Reiersrud's rich-toned and delicately processed acoustic guitar introducing the piece, and Slettahjell's characteristically emotive but non-melismatic delivery, it becomes something even greater, as Arntzen and Hausken gradually introduce a pulse that strengthens while Qvenild and Wesseltoft gradually engage and Reirsrud turns to electric guitar, with volume pedal-swelling lines, for an instrumental interlude that reaches a powerful climax before dissolving into a delicate coda where Slettahjell brings the song to a softer, more atmospheric conclusion.

Wesseltoft and Qvenild each sit out on a couple of tracks, Qvenild most notably on Steve Kuhn's "Chicken Feathers," an impressive solo feature for Wesseltoft that, ranging from elegant introspection to broader, bolder expressionism, continues to justify the feeling that this creator of the New Conceptions of Jazz series—beginning in 1996 and culminating with 2009's New Conceptions of Jazz (Jazzland) box—is truly capable of anything. "Jargo" is an equally impressive solo spot for Reiersrud, an acoustic masterclass from a guitarist who demonstrates that folk music has always been world music. The two then join together for another traditional, "Sæterjentsens Søndag," which Wesseltoft first recorded on Last Spring (ACT, 2012) but here, with Reiersrud's acoustic musings and visceral slide guitar ramblings replacing the album's violinist/violist, Henning Kraggerud, makes crystal clear that you don't need to come from the Mississippi Delta to feel its influence.

Everybody is back in the pool for Qvenild and Slettahjell's marvellous—and, of course, wonderfully slow—arrangements of John Hiatt's often-covered "Have a Little Faith in Me," which the two first recorded on Slettahjell's Pixie Dust (Curling Legs, 2005), and a traditional blues, "Nobody's Fault But Mine," from another Slow Motion Orchestra album, Silver (Curling Legs, 2004), losing the changes but retaining the essence and featuring Reiersrud's cathartic harmonica work before Arntzen and Hausken drive Slettahjell to some of her most unfettered and downright gritty singing of the set as the song builds to a climactic set-closer. Between these two songs, a duo feature for Slettahjel and Qvenild, whose then-nascent electro-acoustic hyper piano was a defining foundation for their look at Tom Waits' "Take It With Me" on Antologie but is even more evolved here, three years later.

It's a set that moves effortlessly from strength to strength, from style to style and from one musician's personality and touchstones to another. Norwegian Woods—Jazz at Berlin Philharmonic II serves both as an introduction and an affirmation for those new to this collection of talented artists and to those who have been following any or all of them for some time. From Norwegian traditionalism to jazz interpretations, renovated blues and contemporary songsmithing, it's is a captivating listen form start to finish, and if the enthusiastic applause that comes at the end of every track is any indication, it was a stellar evening in Berlin that few in the audience will soon forget.

Ingen Vinner Frem Til Denb Evige; Can I Come Home Now; Have a Little Faith in Me; Chicken Feathers; Jargo; Sæterjentsens Søndag; Ned I Vester Soli Glader; Take It With Me; Nobody's Fault But My Own.