By JOHN KELMAN
September 5, 2012
Sign in to view read count 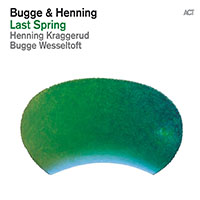 With such a focus on jazz, it's easy to forget that, at the end of the day, all music is—or, at least, comes from— improvised music. Whether drawn from the ether and performed in real time or written down on manuscript, it's still drawn from the ether. Classical music has its own history in improvisation, ranging from Beethoven to Mendelssohn. Folk music, too, has its history of extemporization. So when ACT's label head, Siggi Loch, suggested that Norwegian violinist/violist Henning Kraggerud team with pianist Bugge Wesseltoft for a program steeped in the classical and folk traditions, but imbued with a more unfettered improvisational spirit, the seeds of Last Spring were sown.

Wesseltoft has, since emerging in the early 1990s on albums like bassist Arild Andersen's Sagn (ECM, 1990), proven himself a most adaptable player. Whether recording with saxophonist Jan Garbarek, vibraphonist Mike Mainieri or drummer Billy Cobham, Wesseltoft has always brought an encyclopedic ability to get inside any kind of music, a skill demonstrated even further with his own electro-centric New Conception of Jazz albums, the more recent electro-acoustic solo excursion of Playing (Jazzland, 2009), and his all-acoustic, soft-spoken but revisionist look at standards from the jazz canon and Great American Songbook on Songs (Jazzland, 2012). In the jazz world, Kraggerud may be the lesser known of the two, but in the classical realm he's one of Scandinavia's most renowned string players. Together, they approach this collection of traditional themes and the occasional classical reference with the utmost delicacy; free-spirited, yes, but in the gentlest, most elegant fashion possible.

Recorded at Oslo's legendary Rainbow Studio, with Jan Erik Kongshaug behind the board, it's hard not to imagine this recording showing up on the ECM label, for which the renowned engineer has contributed so much, but a look at the ACT catalog clarifies that Rainbow's reach extends far beyond any single imprint. But if Kongshaug, in a 2010 All About Jazz interview, blithely dismissed his ability to get the perfect piano sound as "you have to have a good tuner; you have to keep the piano in shape," what truly stands out on Last Spring, beyond the playing—which contributes to what may be the year's most sublime and unapologetically lovely album—is the sound. The piano's overtones hover, cloud-like, lending the recording an ambient vibe even though it's wholly acoustic, while Kraggerud's use of violin, viola and custom-built six-string viola concorda add weight, at times; elsewhere, Wesseltoft and Kraggerud reverse roles, with the pianist adopting grander majesty while the violinist soars.

There's the occasional familiar theme—Wesseltoft not just delivering Brahms' "Wiegenlied" lullaby, but throwing a quick reference to Erik Satie's "Gymnopédies" into the intro as well. But as structured as this recital may sound, it's heavily based on interpretation and, in some cases, complete extemporization. An album of tranquil beauty, Last Spring's ability to turn ancestral themes and classical motifs into gossamer miniatures positions it as the overdue sequel to It's Snowing on My Piano, and another major win for ACT, Wesseltoft and Kraggerud.