By Dan Bilawsky
August 9, 2014
Sign in to view read count 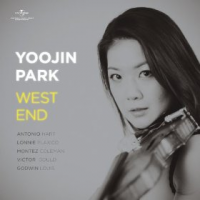 The story of the classically-oriented child prodigy catching the jazz bug is far from new. In fact, that one-sentence tale serves as a basic synopsis of the career trajectory of a significant number of musicians operating today; violinist Yoojin Park just happens to be one of them.

Park, born and raised in Seoul, Korea, began playing violin at the age of four, a year after she started her musical journey on piano. She racked up awards at violin competitions during her youth and went on to earn a Bachelor of Music in Classical Violin Performance at The Korean National University of Arts. Then she came stateside to study jazz, working her way from Berklee in Boston, where she earned a Diploma in Jazz Violin Performance, to Queens College in New York, where she earned her master's degree in Jazz Performance in 2011. This debut album came two years later.

West End is a thoughtful collection of music that speaks to Park's interests in various strains of sound. She works her way through swinging scenarios, soulful numbers, mellow environments, and spirited episodes. Park has some help from a crack crew of musicians, but the common thread that ties all of these pieces together is her graceful and dignified violin playing. As the album begins, she weaves her way through the uplifting "Dancing Blossom," intertwining her violin with the sympathetically-toned alto saxophone of Godwin Louis. Then she introduces "It Ain't Necessarily So" with the support of pianist Victor Gould, delivers the sunny title track atop drummer Montez Coleman's straight-eighth groove, and takes a soulful turn on the generically-titled, Ray Charles-ish "12/8 Blues." The second half of the album finds her delivering a gentle-turned-swinging "Summertime," an appropriately mellow "When Sunny Gets Blue" that ends with a beautiful violin cadenza, an original that serves as something of a solo showcase for bassist Lonnie Plaxico, and a couple other gems.

Poise and purity ooze from Park during this engaging program. A little more fire and risk might have made for an even better end result, but the album doesn't suffer much from the absence of either one. West End is satisfying as it is, presenting an artist who's well on her way.