By Larry Taylor
December 9, 2010
Sign in to view read count 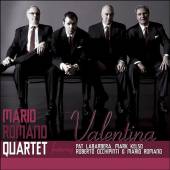 Canadian pianist Mario Romano has an interesting history in jazz. An up-and-coming performer in the 1970s, he took a hiatus from the jazz scene when his Toronto construction business became a big success. Now in 2010, he returns to the scene with the release of Valentina.

Playing with gusto and creativity, he seems not to have missed a beat over the years; still, at the keyboard, Romano owes a lot to seventies contemporaries including McCoy Tyner and Chick Corea.

The quartet regularly works together and it sounds like it. With a solid, cohesive sound, the selections are mostly Romano arrangements of jazz classics, but also includes two originals; one, Romano's "Those Damn I Love Yous," features guest vocalist Kristy Cardinal, who sings with a pure, pleasant voice.

The band plays in a hard-driving, straight-ahead fashion, reminiscent of hard-boppers such as Horace Silver and Blakey's The Jazz Messengers, with Kelso's pyrotechnics driving the up-tempo numbers. LaBarbera is also a commanding presence, in the authoritative manner of Lew Tabackin.

The opener, "Night in Tunisia," is introduced by LaBarbera's brawny sax in an extended cadenza, followed by group's breakneck pace as it races headlong to Kelso's flashy solo, effectively setting off the Lennon/McCartney classic, "Norwegian Woods," which takes on a reflective aura underlined by Romano's repetitive chords, warming to a fiery climax, featuring LaBarbera's blazing tenor. Occhipinti is integral throughout the CD, but is on solo display in the bassist's "Viva Romano."

The closer is a beautiful rendition of "Someday My Prince Will Come," showing that LaBarbera can handle a ballad in the simple way of a John Coltrane.

With Romano back in the woodshed, hopefully some more well-honed recordings can be anticipated.