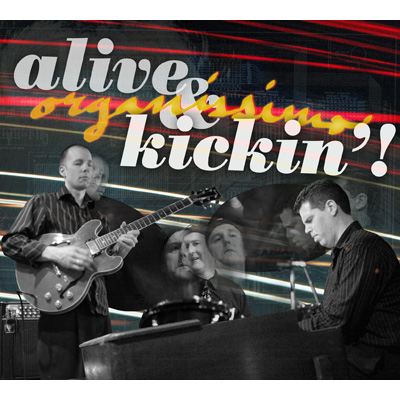 The title of Organissimo's first live recording, Alive & Kickin', is a great description of how a guitar/organ trio live record should sound. Just about everything on this set comes homegrown by this Michigan trio: organ player Jim Alfredson met guitarist Joe Gloss in a Michigan State University (MSU) jazz class; the duo eventually became a trio completed by drummer Randy Marsh, whose experience playing for organists Jimmy Smith and Shirley Scott proved invaluable to the band's soulful yet freestyle jamming sound.

Most of Alive & Kickin' was recorded at MSU, with two additional tracks recorded at one of Organissimo's favorite nightspots in Grand Rapids, MI. Even so, music from Louisiana—more specifically, from New Orleans—plays a prominent part in the opening "Stomp Yo' Feets," which combines with the subsequent "Clap Yo' Hands" to create complementary party jams of sophisticatedly syncopated Crescent City organ funk.

"Clap Yo' Hands" also serves to bridge the tail-whipping trilogy that closes this this set. "Jimmy Smith Goes to Washington" kicks it off: Alfredson's organ sound testifies to the power of gospel truth, and then paints this groove in bright splashes and waves of color using every shade in his pallet and every corner of his canvas; Gloss' guitar bridges that funky gap between soul and bebop, and Marsh tumbles through his own unaccompanied breaks. In "Clap Yo' Hands," Marsh pounds out a torrid go-go beat behind the organ break to further drive the trio to their final soul-jazz destination, "Grooveadelphia."

"Grooveadelphia," the title track of their 2008 release which spent several weeks atop the CMJ Top 40 jazz chart—and most likely titled to honor Smith, Scott, and other famous organ players from Philadelphia—proves to be one funky town. Alfredson finally turns out the lights by soloing with one hand while holding one long, screaming harmony chord with the other, that joyous sound that only organ players can howl.

The "encore," recorded at an earlier show, begins with a cover of Frank Zappa's reflective, almost floating waltz melody "Blessed Relief" ("Frank Zappa was such an influential musician in so many ways, and I don't think he's been given the treatment he deserves," says Alfredson) and ends with a hefty slice (18:40) of the band's signature fatback groove "Pumpkin Pie," which Marsh kicks out just behind the beat to spice up its undercrust with that sassy New Orleans party feeling.