Studebaker John’s Maxwell Street Kings: That’s The Way You Do 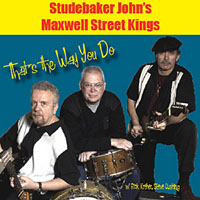 For every facially-contorted string-bender, it sometimes feels like there's a performer who knows the blues on another level; with this release, Studebaker John Grimaldi is one of them. He takes his cues from the Chicago blues in general and from the likes of J.B. Hutto and Hound Dog Taylor in particular. He lives and breathes the primitive sophistication of those artists and the evidence of it is all over this disc, while his band takes its name from that city's legendary street market, just to show he knows his history, too.

He even manages to make a variation on the venerable "Dust My Broom" riff sound fresh on "Fine Cadillac," where the guitars mesh in loose-but-tight fashion and his distinctive vocal has a grace all its own. The manner in which the band nails its loping groove is a potent reminder that, at its most worthwhile, the blues isn't so much about posturing as it is about holding forth on life's joys and misfortunes.

"Headin' Down To Maxwell Street" also proves that a deliciously nasty little three-piece band can move mountains far more effectively than a fifteen-piece juggernaut. Lyrically, John laments the absence of the market, but paradoxically his harp playing is joyous, shouting from the rooftops in a manner that no attempt at taking the location up-market could possibly match.

"B-Line" is an instrumental and, while the absence of John's singular vocals is regrettable, his harp playing again raises the roof in no uncertain terms. It's also possible to appreciate how so much can be accomplished with so little; these guys just know, and because they do, their blues is a living, vibrant thing, as opposed to something informed by the dead hand of reverence and a failure to grasp its form.

In view of all this, a title like "I'll Always Be the Same" is reassuring. John and his cohorts are the kind of guys for whom a makeover would be a waste of time and effort, doing what they do with panache—and an eye for the sheer roughness of being alive that's paradoxically enriching. Pay them all the mind you care to and not a bit of it will be wasted.

That's The Way You Do; Side By Side; Fine Cadillac; Headin' Down To Maxwell Street; If You Would Love Me; B-Line; So In Love With You; Son Of The Seventh Son; Low Down Woman; When Your Mule Won't Ride; Shake It; I'll Always Be The Same; A Fool Just Like Me; Steppin' Stone; Taylor Street Boogie.