Until he recorded his (and Alligator Records') first album, “Hound Dog Taylor and the Houserockers,” in 1971, Taylor was largely unknown outside of Chicago. He played blues guitar for 35 years before reaching a wider audience and gaining the status of a beloved blues icon. From the mid-1950's until 1975, Taylor and his band--second guitarist Brewer Phillips and drummer Ted Harvey--kicked out the blues jams all over the South and West sides, including a regular Sunday afternoon gig at Florence's Lounge. It was at one of these performances in 1970 where a young blues fan named Bruce Iglauer decided to start a blues record label for the sole purpose of recording Hound Dog Taylor and the HouseRockers.

Without a drop of slickness, Taylor's electrified blues was feral, rocking and raw. Taylor played fast, loud and sloppy, and would sometimes hit bad notes or get out of tune. But he always made primeval, soul-satisfying music. Nobody could match him when it came to emotional fervor and the pure joy of making music. Songs like “Give Me Back My Wig,” “She's Gone,” and “Walking The Ceiling” are now considered blues classics.

Born in Mississippi in 1917, Taylor didn't start playing guitar until he was 20. He worked as a sharecropper by day and played at Delta juke joints and house parties in the evenings. After a harrowing encounter with the Ku Klux Klan in 1942 (he had a cross burned in his yard), Taylor moved north to Chicago, where he performed at the famous outdoor market on Maxwell Street, competing for tips with Muddy Waters and Robert Nighthawk. Hound Dog played in ghetto bars at night while working a factory job until the late 1950's, when he became a full time musician. He recorded one single, “Christine/Alley Music,” for Firma Records and another, “Take Five/My Baby's Coming Home,” for Bea & Baby Records in the early 1960's. Both records were good local sellers but went largely unnoticed outside of Chicago. A session for Chess remained unissued until the 1990's. Taylor toured Europe without his band as part of the American Folk Blues Festival, playing behind Little Walter and others, but never got a chance to show European audiences the magic of his own music.

Hound Dog Taylor and the HouseRockers appeared at the second Ann Arbor Blues Festival in 1970 playing to thousands of cheering college kids. When his Alligator album hit the streets in 1971, Taylor's transition from local hero to national and international blues icon was almost immediate. He began touring the country, continuing to win new, young fans. And he never changed a bit. Taylor played his music with furious abandon whether he was at Florence's on the South Side of Chicago or entertaining college kids at Yale or Harvard. "Nobody but nobody brings the house down with a frenzy and madness like these cats," raved Living Blues. "Deliciously raucous," said Guitar Player.

In all, Taylor recorded a total of three Alligator albums before dying of cancer in 1975. Aside from his self-titled 1971 debut, Taylor's records are 1974's “Natural Boogie,” and 1976's live, Grammy©-nominated “Beware of the Dog!,” released shortly after his death. The success of these records gave life to Alligator, allowing the fledgling label to survive and eventually thrive. In 1982 Alligator issued the Grammy-nominated “Genuine Houserocking Music,” a collection of unreleased studio tracks.

His influence on slide guitarists who came after him is immeasurable. Artists from George Thorogood to Sonny Landreth to Vernon Reid to Gov't Mule continue to be inspired by Hound Dog's music. That's why these artists and others, including Elvin Bishop, Luther Allison, Ronnie Earl, Lil' Ed and the Blues Imperials, Son Seals, Alvin Youngblood Hart, Dave Hole, Michael Hill's Blues Mob and Steady Rollin' Bob Margolin contributed songs to Alligator Records' ‘Hound Dog Taylor �" A Tribute” in 1998. A 1999 collection entitled “Deluxe Edition,” continued to spread Hound Dog's legend around the world.

"When I die," Taylor once said, "they'll say, he couldn't play shit but he sure made it sound good.” Show less 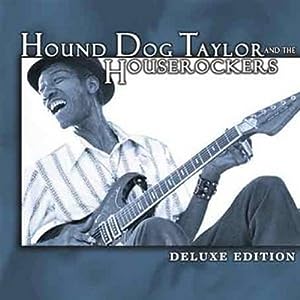 All About Jazz musician pages are maintained by musicians, publicists and trusted members like you. Interested? Tell us why you would like to improve the Hound Dog Taylor musician page.