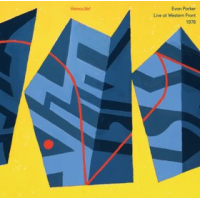 Love or hate it—digital technology has allowed for the reissue of long out- of-print LPs. Once only the province of collectors, Evan Parker's early solo saxophone LP recordings have been reissued as CDs on his Psi label for the past decade. The British saxophonist, a champion of the extended solo improvisation remains a vital voice today. These reissues shed light on his experimental and innovative sound.

Indubitably, the next step in this process is to release unearthed concert recordings.

This live disc is a first-class recording, captured at Western Front—a Canadian artist-run- center for contemporary art and new music—during Parker's 1978 North American tour. The quarter inch tape was restored and mastered for this LP (and digital download), making everything (including old technology) new again.

Like his solo recording from the same year, Monoceros (Incus, 1978), this session is not so much a revelation as it is a recognition of the mighty man's talents. His voice may have deepened as his hair has whitened, but his signature sound was evident 34 years ago.

Both parts were captured in front of a live audience, and Parker gives his performance full stick. Pt. 1 is an uninterrupted circular breathing marathon. He begins with overblowing notes before diving precipitously into vocalized clucks and his (now) signature stuttering trance- inducing repetitions. The pace here is quite rabid and feverish. His soprano maintains channels of agitation through his circular breaths and polyrhythmic finger patterns. Pt. 2, the LP's second side, eases off the pace; he pauses for breaths almost as if one can discern him contemplating his next direction. His multidirectional path here gathers up the post-Coltrane sounds of Albert Ayler, Pharoah Sanders, John Tchicai, and Steve Lacy and invites the next generation to explore this new lexicon. The music on Vaincu.Va! is as fresh today as it was in 1978.