By Nenad Georgievski
April 16, 2013
Sign in to view read count 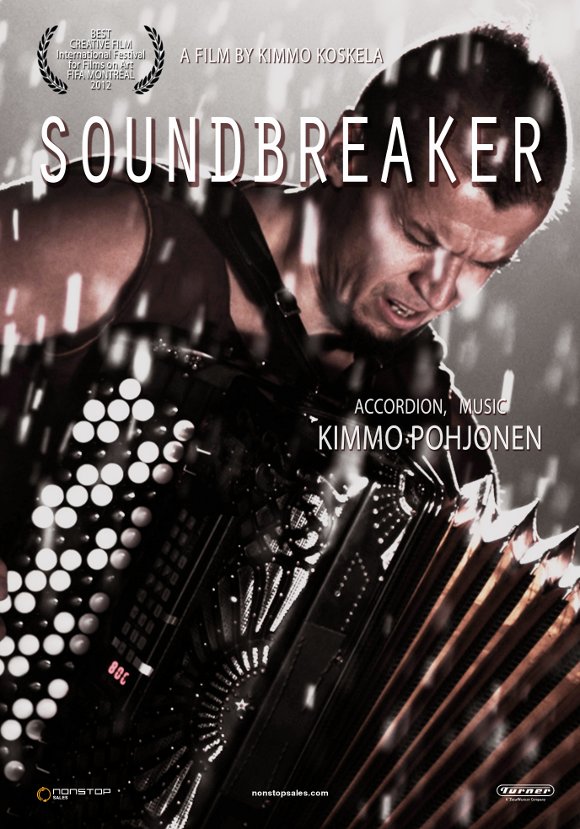 In the hands of avant-accordionist Kimmo Pohjonen, the mechanical intricacies of his instrument become agents of a great musical power, grace and expression. An instrumental virtuoso, Pohjonen has exploited the complete potential of the keys, buttons, and air beneath his fingers by stretching both his instrument and personal performance capabilities. He has been stretching boundaries and defying expectations for more than a decade, with mind-blowing concepts and visual performances. As a fearless adventurer in music, he remains doggedly unaffiliated to any scene, trend or ethos. Directed by Finnish director Kimmo Koskela, Soundbreaker presents an interesting portrait of this exceptional artist by portraying his trajectory from minor folk artist to renowned avant-garde musician and conceptualist.

Soundbreaker is not just a documentary that shows Pohjonen's biography from A to Z; it is a travelogue of both time and space. It is also a visual feast in the same manner as are his many concerts. Pohjonen is a renegade; an uncompromising artist who ventures into types of music that excite him, by his own admission his first years with the accordion found him in a dull and uninteresting position. In the '70s, when he began playing, the accordion was, in his eyes, a very un-cool instrument played by his dad. So for the first 20 years he bore the stigma of being an accordionist, including the time when he studied classical music. It took him that many years to come to terms with the instrument, what it represents and what he could do with it. But the quest for his own identity and sound has helped him: first, for himself, to discover how exciting and cool this instrument can be; and then, by showing it to the world. He achieved this through improvisation, and also through modifying the instrument and expanding its capabilities with various electronics, while simultaneously introducing all kinds of theatrical elements including lighting and sound effects.

Sometimes, it is mind-shattering what he does with his accordion, and sometimes he does it to the point of sacrilege. One of the projects/performances shown here is Earth Machine Music, a performance that samples farmyard noises—including animals, tractors and machines—through the accordion. There's humor sparkled throughout, especially when the voiceover reads what students of classical music shouldn't be doing with the accordion, against a very humorously animated intermezzo.

Pohjonen is an adventurer, and he regularly takes his instrument into directions and contexts for which it was never envisioned. The number of projects he has immersed himself is vast: KTU, with ex-King Crimson drummer Pat Mastelotto and Warr guitarist/bassist Trey Gunn; Accordion Wrestling, a show with choreographed wrestlers against the backdrop of Pohjonen's accordion sounds; and the famed collaboration with Kronos Quartet, Uniko (Ondine, 2011), a very unique sounding masterpiece.

The film, much like Pohjonen's career, hops from place to place and from project to project with spirit and ambition, and offers a unique glimpse into the workings of one of today's most interesting artists and mavericks.