BY JOHN KELMAN
November 3, 2008
Sign in to view read count 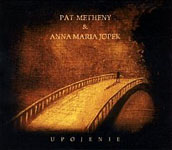 A cult favorite amongst Pat Metheny fans, Upojenie—originally released by "Anna Maria Jopek & Friends with Pat Metheny" in the singer's native country of Poland by Warner Music in 2002—has been long overdue for greater international availability. The Nonesuch edition hasn't been remastered (it doesn't need it), but will still be of interest to Metheny fans for the inclusion of three bonus tracks (one studio, two live) that flesh it out to nearly 75 minutes.

In contrast to the same-day reissue of Metheny's more spontaneous trio disc with bassist Dave Holland and drummer Roy Haynes, Question and Answer (Nonesuch, 2008), Upojenie's heavy production work more closely resembles a Pat Metheny Group project, although Metheny has never had a singer with as lovely a voice as Jopek's. Reworking material from Metheny's own back catalog in addition to traditional Polish songs and originals by Jopek, co-producer Marcin Kydrynski and other Polish writers, it's a soft, accessible album that spotlights Metheny's innate lyricism and Jopek's appealing tone. While others have put words to Metheny's music, most notably Kurt Elling's version of "Minuano" on Man in the Air (Blue Note, 2003), nobody has made it the focus of an album.

Sung in Polish, the meaning of the lyrics can only be gleaned from the liner notes, but what's most important is Jopek's voice. She's a star at home who deserves to be better-known abroad, with her ability to deliver in a pure, unaffected and subtly nuanced fashion making "Przyplyw, Odplyw, Oddech Czasu," based on Metheny's tender "Tell Her You Saw Me," from Secret Story (Nonesuch, 1992), all the more poignant. Metheny's often-covered ballad "Farmer's Trust" begins as a spare duet with Metheny on classical guitar, taking on a gentle, slightly bossa groove when bassist Darek Oleskiewicz and drummer Cezary Konrad enter, setting the stage for a beautifully constructed, melodic solo from pianist Leszek Mozdzer and a more dramatic build to the song's conclusion.

Another Metheny favorite, "Are You Going With Me?" and a more radical, balladic reworking of "Me Jedyne Niebo"—"Another Life" from Speaking of Now (Warner Bros., 2002)—feature Metheny with his signature horn-like guitar synth, while "Zupelnie inna Ja"—Secret Story's "Always and Forever"—adopts a folksier vibe with the baritone guitar Metheny used exclusively on One Quiet Night (Warner Bros., 2003).

In addition to the bonus tracks—the balladic Polish Christmas Carol "Lulajze Jezniu," the spare duet "Na Calej Poloci Snieg" and considerably brighter album closer, "Szepty I Lzy"—like Metheny's reissue of his classic Song X (1985, reissued by Nonesuch, 2005), the running order has been completely changed. There will be those who prefer the original sequence, but this version is improved by a certain seamless inevitability and narrative flow.

Visit Pat Metheny and Anna Maria Jopek on the web.