Up Jumped the Devil: The Real Life of Robert Johnson by Bruce Conforth & Gayle Dean Wardlow 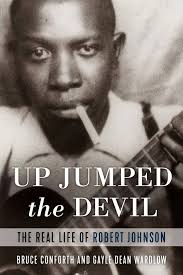 There is a wonderful social media meme that applies to almost all of the writing about Robert Johnson before Bruce Conforth and Gayle Dean Wardlow's long-awaited biography, Up Jumped the Devil: The Real Life of Robert Johnson:

There are two types of people in this world:

1. Those who can extrapolate from incomplete data...

The authors carefully explain that it was the spirous extrapolation, starting with Columbia A&R man John Hammond, that initiated, detonated, and then propagated every myth that was to plague all Johnson reportage for 50 years. Finally, we have a near definitive word on the subject

It is not that the authors did not do a good bit of extrapolation on their own. But theirs was much more biography driven, aimed at considering Johnson's motivations, emotions, and states of mind. That is where one goes once a series of carefully collected and vetted facts rarely or never before revealed are lined up chronologically, presenting a cogent story with a beginning, a middle, and an end. That said, we have arrived at the most complete picture of the artist Johnson-scholar Mack McCormick called a "Phantom" than previous existed. This picture is rendered in an easily read and beautifully constructed narrative approaching that of Robert Palmer's seminal (if overly-romantic) Deep Blues: A Musical And Cultural History Of The Mississippi Delta (Viking Press, 1981).

The authors achieved this most fully-realized picture of a truly important American musical figure from a combination of 60 years of personal Johnson ground research and the same 60 years of blues reportage, all ot it, from the worst to the best. The pair drew from every published resource addressing Johnson and the world from which he came, filling in the gaps with concomitant history and news, creating a robust picture of both the individual and the environment that produced him. Sources included all of the usual suspects, including Stephen Calt, Samuel Charters, Bruce Cook, Francis Davis, Ted Gioia, Peter Grulnick, Steve LaVere, Alan Lomax, Griel Marcus, Robert Palmer, Elijah Wald, and many more..

Pleasantly revealed in this book were previously published and unpublished interviews with many friends and family of Johnson, that include: Son House, Henry Townsend, Robert Lockwood, Johnny Shines, Sedell Davis, Willie Mae Powell Holmes, Don Law, Marie Oertle, Virgie Cain, Israel "Wink" Clark and many others. The authors deftly took these often contradictory and inconsistent narratives and spun them into a more complete and informative whole; one that has been more than one-hundred years in the making.

Johnson's family lineage is cleared up with much narrative devoted to explaining his parentage and step-parentage for three generations, as well as, Johnson's relationships with women. This detail provides a more fully-realized picture of Johnson, one carefully wiping away the romantic patina making him McCormick's phantom. He becomes flesh and blood, all too human and fallible. Explained in detail are the different names Johnson went by throughout his life, generally based on what father figure was presently available to him. Johnson's inamorata are more fully described with wanted detail about his wife and child that died and the mother of his son Claude and grandsons, who would live to manage the Robert Johnson Blues Foundation.

Johnson's early life reveals a more urban figure, benefiting from having lived and received an education in a large city, Memphis, Tennessee. Unlike a majority of Delta musicians, Johnson could read and write. He also received at least a rudimentary music education during his brief elementary experience. As an urban figure, Johnson was exposed to more sophisticated musicians than his hagiographic mentors Charlie Patton, Willie Brown,and Son House. Johnson was much more Lonnie Johnson than Son House. The famous story of Johnson being run off by House and Brown while playing a juke joint is revealed as more of jealous ploy than Johnson was actually playing badly. Johnson played differently, not badly. Simply compare Johnson's "Walking Blues" or "Preachin' Blues" with their predecessor by House and that difference is starkly clear. Johnson was dragging Delta Blues from the 19th into the 20th century. House and Brown were being shown an artistic future.

The Faustian Bargain myth is dealt with throughout the biography, which itself. The issue is not whether Johnson went to a crossroads and allowed a sinister apparition to tune his guitar and he emerged a better musician. The issue is how this story was used to promote Johnson's music and performances. What has to exist first is a gullible and superstitious population given to such stories. This was provided by the misculabily of Christian and Hoodoo traditions widely recognised in the area. While Johnson may have been troubled by the Saturday-Night-Sunday-Morning paradox, there is no reason to believe so. Johnson certainly had to have some church experience with little or none of it sticking. The authors emphasize this. Additionally, there was absolutely nothing new about spinning yarns about crossroads and graveyards. Peetie Wheatstraw, "The Devil's Son-in law" and Tommy Johnson both made similar claims years ahead of Johnson. Credit this myth to white record collectors and Son House and be done with it, save for the story as a cultural artifact.

Another myth dispelled is that of Johnson being an Ur-blues figure who stayed close to the Delta, venturing out only to record in Texas twice. While Johnson always returned to the Delta area, he travelled to St. Louis and Louisiana often. Johnson's rambling took him to Chicago, Detroit, and New York City, all detailed here. Additionally, Johnson repertoire was shown to be much wider than earlier writers contended. Johnson was well-versed in the popular music of the day, music that he heard on the phonograph and in jukeboxes, making Johnson a progenitor of every pimply-faced, middle-class, white teenage boy sitting in front of a record player with a guitar, picking songs out by ear. Johnson could play ragtime, Tin Pan Alley, and light classics, as well as, polkas, Jewish, and Christian church music. He was a professional musician making a living.

Johnson's own vision of himself as a professional musician and artist was cemented with his two recording sessions, leading to the myth of greater than regional recognition as a musician. Johnson never sold many discs. This fact was detailed in Elijah Wald's essential Escaping The Delta: Robert Johnson And The Invention Of The Blues (Amistad Press, 2004). A good many of Johnson's songs were derivative of earlier songs. This was the way of early blues music. But while Johnson may not have been a seminal blues figure, he transformed the genre, bridging the gap between the acoustic Charlie Patton and Son House and electric Muddy Waters and Howlin' Wolf.

It is the author's narrative devoted to Johnson's recording sessions that proves riveting reading. Each master and alternate are thoroughly considered mostly in the order in which they were recorded. "Come On In My Kitchen," "Hellhound On My Trail," and "Stones in My Passway" all considered masterpieces. The author's reveal and document Johnson's sophisticated use of alternate guitar tunings and pitch selection. Johnson was no hayseed novice genius lucking into notice but a well-studied musician with a keen detection of style and nuance. The authors provide original sources for all of Johnson's more derivative songs, like Skip James' "22-20 Blues" for Johnson's "32-20 Blues" and Son House's "Walking Blues" and Preachin' Blues" for Johnson's performances of the same title noting the differences and similarities in an informative manner.

The detail surrounding Johnson's death occurs almost as a fleeting after-thought. Johnson returns to Mississippi after his New York sojourn, traveling deep into the Delta to perform in larger Delta cities. Sandblasting all of the romance surrounding Johnson's death, this demise is reduced to a poisoning with naphthalene that caused protracted nausea and vomiting causing dissection of Johnson's alcoholic esophageal varices and his ultimate hemorrhaging to death. Not strychnine, not brucine, not arsenic. His resting place is established as beneath a pecan tree in the cemetery of the Little Zion Church, north of Greenwood along Money Road.

A fractious 60-year journey brings us here. I am not sure that this is not an anticlimax. I have often contended that it is not Robert Johnson's story that reveals ourselves to us, but the story about Johnson's story that is most fascinating and often sad. Is Conforth and Wardlow's book the final word on Robert Johnson? I hope not. In spite of blues scholar Ted Gioia's insistence that Mack McCormick's Biography of a Phantom will never see the light of day (and I am sure he is right) there remains much to sustain this research well into the future. This is just. In the end, Robert Johnson's musical corpus represents a body of work as important to world culture as that of Johann Sebastian Bach. We should honor this.