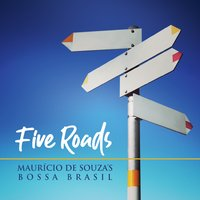 If your idea of a great drummer's album is an album full of sonic bombast, do not pick up Five Roads by drummer Mauricio de Souza and his ensemble Bossa Brasil. If you love showy drum fills, histrionic drum solos, or volume masquerading as intensity, you'll find none here. Instead, the drummer leads Bossa Brasil down these Five Roads from behind, strongly and surely, and thoughtfully too.

Born in Brasilia, the national capital located in the Federal District of Brazil, de Souza began studying drums at age eleven. As a high school junior, he spent his summer vacation studying with drummer Joe Morello, a legitimate legend from his pliant but sturdy work with Dave Brubeck, in New Jersey. He returned to the US after graduating high school to continue studying with Morello, and in 2004 settled in northern New Jersey to engage with the New York jazz club scene. Later that year, de Souza formed the Maurício de Souza Group to play straight-ahead jazz, and Bossa Brasil to focus on the different styles of music from his homeland.

(We should note that ANY artist who willingly leaves Brazil for New Jersey is truly devoted to their craft.)

Morello is an excellent example of de Souza's own style and sound in Bossa Brasil. He doesn't play to be noticed. He plays what the music needs, no more and no less, right when the music needs it. So when your ear is drawn toward soloists Andrew Beals (alto saxophone) and especially Bob Rodriguez (piano) in the bouncy "Bebeto," de Souza and bassist Gary Mazzaroppi keep the supporting rhythm in perfect flow. Same for the sly dance of "BB," where de Souza's brushes seem to caress instead of strike, gently pulling rhythms and notes out from, his instrument like it's a magician's hat.

Pianist Rodriquez steps into beautiful Brazilian jazz solos in "Bate Papo" and "Folclórica." But as the leader and drummer, de Souza opens up the music for each member of his quartet (plus bassist Charlie Doughtery, who sits in for Mazzaroppi on a live version of "Valsinha Para Elvira") to find their own way along Five Roads.