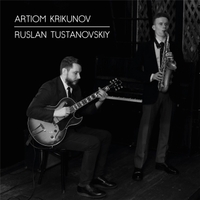 In 1983, guitarist Joe Pass and tenor saxophone legend Zoot Sims went into a studio and recorded the impressive album Blues for Two. Among those who were most impressed was another guitarist, Artiom Krikunov, who was inspired to pay homage to Messrs. Pass and Sims by recording his own duo album in tandem with Russian-born alto saxophonist Ruslan Tustanovskiy. Perhaps in deference to their illustrious forebears, the album bears no title, simply their names and photos on the front jacket.

Was stepping into such mammoth shoes a sound idea? Well, there was of course only one Zoot Sims, as there was only one Joe Pass. On the other hand, Krikunov and Tustanovskiy prove from the outset that they haven't bitten off more than they can chew. Each of them is technically sharp and spontaneously resourceful, and the result is rather like an agreeable snapshot of Zoot and Joe albeit with a tad less color and charisma. There's a lot of Pass in Krikunov's burnished guitar, while Tustanovskiy makes do with an occasional nod to Sims while displaying his superior command of the alto at any and all tempos.

The duo's choice of material is unerring: four endearing standards from the Great American Songbook breezily rubbing shoulders with Duke Ellington's wistful "Mood Indigo," Oscar Pettiford's melodious "Tricotism" and a trio of bright original compositions, the first of which, "Dewey Square," is based on Zoot's popular theme, "The Red Door" (which is presumably based on something else). The standards, in order, are "There Is No Greater Love," "Stars Fell on Alabama," "I Remember You" and "I Can't Give You Anything But Love" (popularized in the '30s Cary Grant / Kate Hepburn film classic Bringing Up Baby). Krikunov and Tustanovskiy give each of them a pleasurable ride, as they do the others including the earnest "Label 5 Blues" and jaunty "Blues for Rus" (Russia?). On "Label 5" and "Blues for Rus," Tustanovskiy positions his alto near the tenor range throughout the song's exposition and indeed until well into his solo.

No, this is neither Sims nor Pass; it is, however, a credible facsimile of their matchless artistry by a pair of contemporary musicians whose purpose was never to duplicate but instead pay fond tribute to two masters of the genre. In doing so, they have produced a tasteful two-slice narrative that stands well on its own.

Dewey Square; There Is No Greater Love; Label 5 Blues; Stars Fell on Alabama; I Remember You; Blues for Rus; I Can’t Give You Anything But Love; Mood Indigo; Tricotism.