By Dan Bilawsky
September 19, 2011
Sign in to view read count 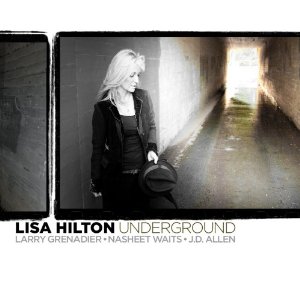 In the minds of some musicians and fans, music is meant to be an athletic competition where speed and strength trump everything else, but a large segment of audiences and performers don't buy into that line of thinking. Others believe that music can be a vehicle for expressing emotions and dealing in the art of communication, and pianist Lisa Hilton's Underground embodies those very ideals.

Hilton's music has never been of the chops-heavy variety, but the California-based pianist/composer is a masterful mood-setter and a conceptualist nonpareil. While earlier albums in her discography occasionally painted sunny pictures, in keeping with stereotypes that often surround West Coast jazz musicians, Underground is a darker production that proves to be her strongest outing yet.

Hilton has always surrounded herself with the cream of the crop, with musicians like bassist Christian McBride, drummer Lewis Nash and trumpeter Jeremy Pelt appearing on previous albums, but the personnel on Underground suits her better than any group she's used before. Bassist Larry Grenadier is the lynchpin of this band, and tenor saxophonist JD Allen brings an understated intensity to the music. While Hilton has worked with both men before, drummer Nasheet Waits is new to the fold, and he brings a sense of the unknown into her world. Hilton's go-to drummer in the past—neo-traditionalist taste maker Lewis Nash—is certainly one of the finest players around, but Waits' willingness to paint outside the lines helps to take Hilton's music in more adventurous directions. His jittery stick work and broken rhythms manage to simultaneously contradict and complement her piano playing.

A unified sense of sound and purpose is carried across the entire album, but Hilton's music isn't unidirectional. Choppy lines and cross-rhythmic conversations come into focus as the album begins ("Underground"), but a dirge-like, bluesy sensibility surrounds other songs ("Boston+Blues"). While dark hues appear throughout the album in various forms, "Jack & Jill" is bright as can be. This particular blues number is worry-free music, and it's book-ended by cheery sounds that could serve as the soundtrack to a silent film scene. Elsewhere, Hilton nods toward Bill Evans ("B Minor Waltz"), deals in cathartic musical expressions with some help from Allen ("Blue Truth"), and delivers a chordal feast for the ears ("Someday, Somehow, Soon").

On Underground, Lisa Hilton and her simpatico ensemble explore all of these pieces to the fullest extent, digging below the surface to reach the emotional core that lies beneath.