By Doug Collette
September 19, 2011
Sign in to view read count 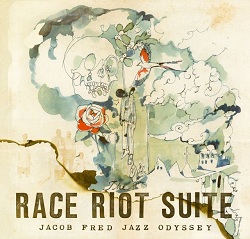 Jacob Fred Jazz Odyssey's Race Riot Suite is a reminder how adventurous the group has always been since its inception in 1994—never more so, perhaps, than in its latest incarnation, in place beginning in 2010.

Four intervals, labeled "Prayers," are interspersed throughout the seven formally labeled tracks and allow JFJO to demonstrate its own collective and individual skill at improvisation. That cursory and close listens whet the appetite for more such jamming is a tribute to the judicious way this album was recorded and produced in the same city where the events took place. It's a tribute to the writing and the playing of all involved that the transitions in and out of the structure are seamless. Chris Combs' lap steel solo on "Black Wall Street" is as jaunty as double bassist Jeff Hershbarger's, and both interludes extend the mood of the structured piece.

That said, the group's deference to a star-studded horn section on this extended composition is startling on first listen and confounding on subsequent spins. Inspired by the 1921 riot in Tulsa, Oklahoma, this extended suite—written, arranged and orchestrated by Combs—finds the five-man woodwind complement prominent from the very start. The core quartet then serves to embroider themes such as those stated on "Prelude," for instance, which are then recapitulated by trumpeter Steve Bernstein, baritone saxophonist Peter Apfelbaum, tenor saxophonist Jeff Coffin, tenor saxophonist Matt Southerland and trombonist Matt Leland.

Having accompanied the likes of Bela Fleck, Don Cherry and Levon Helm, among others, each of those horn players has a well-earned pedigree justified during the course of Race Riot Suite. Playing in unison, they fashion the backdrop for "Mt Zion," which segues neatly from pianist Brian Haas' carefully- configured intro, in itself an extension of "First Prayer"; the reflective nature of his playing there, in counterpoint to the horns, clearly represents the cultural conflicts at the heart of the story.

As the suite reaches its most dramatic moments during "Grandfather's Gun," the circular nature of the piece becomes evident, as does the recession of JFJO into background players on its own piece. Some promising call-and-response between horns and piano gives way to dueling saxophones on the feverish "Cover Up," one of the few such junctures here, begging the question of how much JFJO themselves will expand its role in this whole piece when and if it's played live, sans horns.

As the invocation of peace in "Third Prayer" morphs from mere suggestion to overt declaration on the fitful "Eye of the Dove," Haas' surrender of the spotlight to Apfelbaum is a reminder of how little has been heard of the pianist and his three JFJO comrades during the course of this 46-plus minutes. The confluence of motifs within the recording on this disc tantalizes as much as it fulfills, thus rendering repeated listenings necessary, if only to better glean the nuances of the piece itself, as well as the instrumental personalities involved.