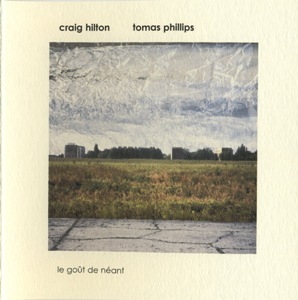 According to its sleeve notes, the opening track of Le goût de néant, "Sans mouvement I," is a studio recording of Craig Hilton playing solo guzheng, a multi-stringed Chinese zither with movable bridges. This is remarkable, as it does not sound like one person playing a solo instrument; the resonances produced by the guzheng create the impression of a many-layered, drone-like sound collage—one which is very pleasing, bearing resemblances to some of Brian Eno's slowly-evolving, ambient pieces. Had the entire album continued in the same way throughout, it would have been extremely satisfying.

But instead of leaving that opening track to stand on its merits, on the album's other three tracks Hilton and Tomas Phillips use its solo guzheng music as source material which they treat and enhance with layers of sound. So "Sans mouvement II" open with waves of a swooshing sound—reminiscent of sea shells being washed by waves—before the guzheng music gradually enters; other underlying sounds gently ebb and flow beneath it, giving the piece a dynamic quality that saves it from too closely resembling a new-age soundtrack. The piece closes with the same swooshing sound that began it, creating an appealing symmetry.

The prolonged title track, the album's longest at almost 24 minutes, has no obvious connection to Baudelaire's poem other sharing the title. Compared to the other three similarly-titled tracks, it sounds rather different due to Hilton and Phillips employing less organic and more industrial sounds—clinking, clanking, clattering, scraping—to offset the tranquility of the guzheng, with interludes of undulating sustained tones again creating a drone effect. After a pregnant silence, the last four minutes of the track slowly build tension before bringing it to a well-rounded conclusion with some treated guzheng.

The concluding track, "Sans mouvement III," again features treated guzheng, this time slowed down to provide an effective low frequency rumble that underpins the piece. Over the top of it are added higher frequency sounds—crackles, vibrations, fizzes, ringing, sines waves—which contrast well, making a full, rich soundscape. Fittingly, the track—and album—concludes with the tranquil unadorned sound of the guzheng.

This is a beautiful album and one of the year's best, being easy to listen to repeatedly without becoming easy listening.

About Craig Hilton and Tomas Phillips