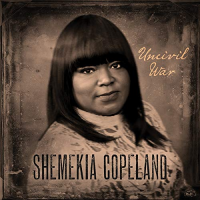 Blues vocalist Shemekia Copeland has firmly established herself as one of the most important modern blues artists. Though born in Harlem and raised in New Jersey, her sound has always clearly shouted Texas, reflecting her family ties to the music through her father, Texas bluesman Johnny Copeland. Her albums have called attention to her powerful instrument and natural penchant to find the inner soul of the material she chooses. On Uncivil War (Alligator, 2020), she plays above the rim, teaming with guitarist/songwriter/producer Will Kimbrough to produce perhaps the most relevant blues album of the past decade.

Uncivil War flips the script for what one may come to expect of a blues album and its narrative, moving on from the more traditional themes to one reflective of the social justice movement that has risen out of the tragedy of the worldwide Covid-19 pandemic in 2020.

The opener, "Clotilda's On Fire," is a deep dive into the lasting impact of American slavery. "Walk Until I Ride," is a soulful civil rights anthem, stating, "Take my freedom, take my pride, I'm going to walk until I ride."

Copeland pontificates about gun violence in America with "Apple Pie and a .45," and LGBTQ rights with "She Don't Wear Pink." "Money Makes You Ugly" is written in support of the environmental movement, while "Give God the Blues" studies the variable existential similarities between Abrahamic faiths. In short, Copeland eschews the often misogynistic pontifications of male dominated traditional blues fare in favor of social themes relevant to our times. That in itself tags this release as being significant in these most epic of times.

The title track is an acoustic number posing the question of how long we must continue to live within the confines of social polarization. Copeland delivers her most emotive singing, fully engaging heart and soul into a narrative that cuts deep into the American social divide, while offering both hope and a vision of unity.

Copeland closes the proceedings with a nod to her familial roots in the music, performing her father's walking blues, "Love Song." Elected to the Blues Hall of Fame in 2017 some twenty years after his death, the senior Copeland seems to have found a special place in the artistic soul of his daughter. She finds a way to take the tune to its emotive apex with an ease and honesty that is so elusive, so rare.

The band behind Copeland includes guitarists Steve Cropper, and Christone "Kingfish" Ingram, slide guitarist Jerry Douglas, and mandolinist Sam Bush. It is Nashville-based Kimbrough however, that truly impacts the vibe of the record, writing seven of twelve tunes, and offering tasteful rhythm and lead work on guitar. The result is an artist finding her collective spirit in a single session, with a performance of unforced focus, beauty and social relevance.

Clotilda's On Fire; Walk Until I Ride; Uncivil War; Money Makes You Ugly; Dirty Saint; Under My Thumb; Apple Pie and a .45; Give God the Blues; She Don't Wear Pink; No Heart At All; In the Dark, Love Song.