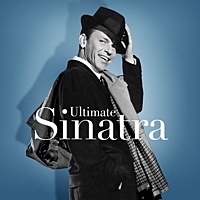 On December 12, 1915, Francis Albert Sinatra was born in Hoboken, New Jersey. This single birth in this sleepy borough was the first tremor in a musical earthquake that changed the cultural landscape all around the world, forever.

On April 21, 2015, in celebration of Frank Sinatra's centennial year, Capitol/UMe released the first career retrospective that surveys the complete recording history of "The Chairman of the Board." Drawn from his recordings for Columbia (1943-'52), Capitol (1953-'62; 1993-'94) and his own label, Reprise Records (1960-'88), Ultimate Sinatra comes in several different digital and physical configurations: A 25-track single CD, 26-track digital download (with "My Kind of Town [Chicago]" as a bonus cut), 24-track 180 gram double vinyl set, and deluxe 101-track four-CD and digital editions that conclude with a previously unreleased, 1979 rehearsal version of "The Surrey With The Fringe On Top." Every configuration opens with "All or Nothing at All" from Sinatra's first recording session, with Harry James and his Orchestra in August, 1939.

"I adore making records," Sinatra once said. "I'd rather do that than almost anything else." His 1,400 recordings resulted in 31 gold, nine platinum, three double platinum and one triple platinum albums. He was nominated for more than thirty and won nearly a dozen Grammy Awards, including three Albums of the Year: Come Dance With Me (Capitol, 1959), September of My Years (Reprise, '65) and A Man and His Music (Reprise, '67). He also produced eight, and appeared in more than sixty, motion pictures.

Sinatra consistently worked with the finest songwriters, arrangers, bandleaders and musicians throughout his six-decade recording career, including Count Basie, Nelson Riddle, Duke Ellington, Quincy Jones and Antonio Carlos Jobim, with whom he partnered for the exquisite bossa nova journey Francis Albert Sinatra / Antonio Carlos Jobim (Reprise, '66). "I've sung and recorded so many wonderful songs over the years, it would be impossible to name one in particular as my favorite. Many of them are special to me for one reason or another," Sinatra once recalled. "It's difficult to pick a favorite album. The ones that stick in my mind are Only The Lonely, Wee Small Hours, and Come Fly With Me because I think the orchestrator's work and my work came together so well."

Frank Sinatra was awarded Lifetime Achievement Awards from The Recording Academy, The Screen Actors Guild and the National Association for the Advancement of Colored People, plus the Kennedy Center Honors, the Congressional Gold Medal and the Presidential Medal of Freedom.

Frank Sinatra possessed a unique ability to project a powerful emotional connection to the songs he sang. At his best, Sinatra more than sang a song—he embodied its spirit and meaning. This seems especially true when he swaggers body and soul through songs such as "That's Life" and "Come Rain or Come Shine," transforming them through this connection from songs into statements of purpose. No other singer could audibly swagger with his voice, the cock of the walk in badass sound, like Sinatra: Listen to him smear the word "blues" down through nearly an entire octave of blue notes in "The Birth of the Blues" or his triumphant ride down "Ol' Man River" (from the musical Show Boat), which ends so strongly it sounds nearly defiant.

And yet somewhere along the way, life must have stomped Frank Sinatra's bad ass pretty good. Sinatra's version of the barroom blues "One For My Baby (And One More For The Road)" is most likely the ultimate expression of its universal truths, and a genuine accomplishment for the ages. "Angel Eyes" and "Guess I'll Hang My Tears Out to Dry" simmer regret into a new heartache born from trying to extinguish an old flame. In "September of My Years," he watches children on a merry-go-round but sees the days of his life twirl past; "It Was a Very Good Year" more fully lifts this curtain, so we can hear him confront the demons of his own mortality.

Sinatra also sang with the expert timing of a champion prizefighter. He phrases "my bending your ear" in the closing verse of "One for My Baby" like a trumpet player moaning the blues. In the rollicking "That's Life," which seems like Sinatra's take on Ray Charles (complete with soulful organ swirls and beckoning female gospel vocalists), he phrases "I said that's life" to open the second verse like a trumpet, trombone or other brass instrumentalist blowing the blues hard and hot.

If you think Sinatra didn't know about rock 'n' roll, think again: Feel the strong rhythm as his voice rides the beat like John Wayne in the chorus after the bridge in "Come Rain or Shine," or feel his voice duke it out with the drums in the bridge and then growl and roar through the closing of "That's Life." (His cautionary line in "Luck Be A Lady" that a dame don't blow on another guy's dice remains a hoot.)

Ultimate Sinatra is not a perfect collection: It's hard to believe that there wasn't room for the medley "The Gal Who Got Away/It Never Entered My Mind," a true emotional tour de force, and especially Sinatra's tomcat prowl through Johnny Mercer's "Blues in the Night." But as we celebrate its centennial, Ultimate Sinatra IS a perfect reminder that the year Frank Sinatra was born was indeed a very good year.

Disc 1: All Or Nothing At All; I'll Never Smile Again; Street of Dreams; You'll Never Know; If You Are But A Dream; Saturday Night (Is The Loneliest Night Of The Week); Nancy (With The Laughing Face); Oh! What It Seemed To Be; Five Minutes More; Time After Time; Night And Day; The Song Is You; I'm A Fool To Want You; The Birth Of The Blues; Why Try To Change Me Now; I've Got The World On A String; Don't Worry 'Bout Me; My Funny Valentine; They Can't Take That Away From Me; I Get A Kick Out Of You; Young At Heart; Last Night When We Were Young; Three Coins In The Fountain; Just One Of Those Things; All Of Me; Someone To Watch Over Me; I Get Along Without You Very Well.

Disc 2: This Love Of Mine; In The Wee Small Hours Of The Morning; Learnin' The Blues; Love And Marriage; (Love Is) The Tender Trap; Love Is Here To Stay; You Make Me Feel So Young; Memories Of You; I've Got You Under My Skin; Too Marvelous For Words; (How Little It Matters) How Little We Know; I Couldn't Sleep A Wink Last Night; I Wish I Were In Love Again; The Lady Is A Tramp; From This Moment On; Laura; Where Are You?; Witchcraft; Bewitched; All The Way; Moonlight In Vermont; Come Fly With Me; Put Your Dreams Away; Angel Eyes; Guess I'll Hang My Tears Out To Dry.

Disc 3: Only The Lonely; One For My Baby (And One More For The Road); Something's Gotta Give; Come Dance With Me; Here's That Rainy Day; A Cottage For Sale; High Hopes; The Nearness Of You; I've Got A Crush On You; Nice 'N' Easy; When The World Was Young; In The Still Of The Night; The Second Time Around; Without A Song; Loved Walked In; Stardust; Come Rain Or Come Shine; The Girl Next Door; At Long Last Love; The Very Thought Of You; Pennies From Heaven; Ol' Man River; I Have Dreamed; Luck Be A Lady.

Disc 4: The Way You Look Tonight; My Kind Of Town; The Best Is Yet To Come; Fly Me To The Moon (In Other Words); Softly, As I Leave You; It Was A Very Good Year; September Of My Years; Moonlight Serenade; Strangers In The Night; Summer Wind; That's Life; I Concentrate On You; The Girl From Ipanema; Drinking Again; Somethin' Stupid (with Nancy Sinatra); The World We Knew (Over And Over); Cycles; My Way; Wave; All My Tomorrows; Forget To Remember; It Had To Be You; All Of You; Theme From 'New York, New York'; The Surrey With The Fringe On Top (previously unreleased rehearsal).