BY BRUCE LINDSAY
December 17, 2009
Sign in to view read count 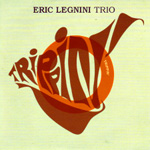 Trippin', the third album from the Paris-based Eric Legnini Trio, is a stylish collection of tunes named in honor of The Meters' third album, Struttin' (Josie, 1970). When Legnini takes to the Fender Rhodes, on "Trippin'" or "Doo Goo" for example, the influence of The Meters' organ-driven sound is clear—both tunes are uplifting, dance-oriented numbers with "Doo Goo" featuring some irresistible and funky rhythms. But this album is much more than a tribute album to New Orleans rhythm and blues—the trio is certainly capable of funky, danceable tunes but it can also deliver on ballads, hard bop, and straight-ahead material.

Legnini combines his own compositions with an intriguing selection of standards. A straightforward version of Jimmy Van Heusen's "Darn That Dream" showcases Legnini's piano, while Dizzy Gillespie's "Con Alma" swings beautifully, thanks especially to the drumming of Franck Agulhon. Stevie Wonder's "The Secret Life of Plants" is stripped bare and turned into a delicate and gentle solo piano performance.

Legnini's own writing shows a fine talent at work. "Casa Bamako" is an excellent example of his ability to deliver danceable tunes: his piano playing is positive and direct, laying down a strong rhythm as well as a funky melody line, Mathias Allamane echoes the rhythm on bass and Agulhon's drumming adds a strong and irresistible groove. "Bullitt Mustang Fastback" is a speedy, hard bop tune named presumably as a tribute to one of Steve McQueen's best known characters and his car. "Jade" and "Introspection #1," by contrast, are lovely but brief solo piano pieces.

The musicians on this album are among some of the most in-demand on the European jazz scene. Legnini and Agulhon both appear on Kyle Eastwood's Metropolitain (Candid Records, 2009) while Allamane has worked with Toots Thielemans and Stefano di Battista among others. As a trio they have a superb musical relationship—all three are able to hold down a solid beat, develop intricate rhythms and grooves or take effective and inventive solos. Together they ensure that Trippin' is a consistently engaging album that holds many surprises and delights.

Trippin'; Casa Bamako; Bleak Beauty; Con Alma; Rock the Days; The Secret Life of Plants; Amarone; Introspection #1; Them That Got; A Sleeping Bee; Doo-Goo; Darn That Dream; Bullitt Mustang Fastback; Jade; The Shadow of Your Smile.