The David Leonhardt Trio: Bach to the Blues

By Edward Blanco
December 17, 2009
Sign in to view read count 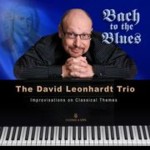 Pianist David Leonhardt presents a tasteful marriage of classical music and jazz, sprinkled with a touch of the blues on Bach to the Blues, an improvisational statement on classical themes that is surprisingly entertaining. Leonhardt reinterprets the music of Bach, Schubert, Beethoven, Chopin, and others with a creative improvisational approach producing a texture of light classical jazz that is most enjoyable. With bassist Matthew Parrish and drummer Alvester Garnett, The David Leonhardt Trio offers eleven pieces from eight great composers from the classical genre delivered in a stylish graceful manner that may appeal to those who prefer the gentler side of jazz.

Throughout his thirty-eight years of professional experience, Leonhardt has often included a bit of improvisation on classical music as part of his concerts so it is only logical that these performances finally find their way to a recording studio. With Bach to the Blues, the pianist pays special attention to the music of Johann Sebastian Bach by performing three of his compositions, beginning with "Prelude in G Minor," containing the predictable Bach piano chords, the expected jazzy twist, and ending with an unexpected Latin jazz flurry. The other Bach pieces include "Prelude in A Minor," which retains much of the original classical flavor unlike "Prelude in Bb," which turns jazzy rather quickly highlighting strong performances from both Parrish and Garnett.

Leonhardt draws on the music of French Impressionist music pioneer Claude Debussy with a marvelous performance of the charming "Claire De Lune," known as one of Debussy's most popular compositions and follows with a humble reading of Schubert's renowned "Ave Maria." Perhaps the centerpiece of the album, if not the most ambitious and beautiful piece presented here, is the stunning version of 20th century avant-garde French composer/pianist, Erik Satie's "Gymnopedie No. 1."

The other outstanding piece of music is Chopin's "Mazurka in C Major," where Leonhardt is especially delightful in his treatment of this classical number. The project ends with the music of German Baroque composer Johann Pachelbel, as the trio performs a slow dance of the composer's best known work on "Canon in D," the only canon Pachelbel actually wrote, closing a superb selection of classical jazz.