For many jazz fans, Stefano Di Battista will always be associated with the city of Paris, where he became a regular performer at The Sunset in the mid-1990s. From there, the alto and soprano saxophonist became a valuable sideman (to the late piano great Michel Petrucciani and later, drummer Elvin Jones) before launching his own solo career. On Round About Roma, his third date for Blue Note, Di Battista keeps the lush romance of the City of Lights alive and well while taking us back to the music of Rome, his beloved birthplace, where his journey on the sax began at age 13.

"This album is a story about Rome and its history, with every song featuring a unique point of view about the city’s life," he says. "The idea was to remember people and places, both real and fictional, like ‘Romeo and Juliet’ and ‘Anastasia,’ and bring out love through the music. It’s important that as a composer and player, I always tell the truth. My band and I really liked the 2000 Joni Mitchell CD Both Sides Now and we wanted to recreate a new kind of jazz music using this idea."

Di Battista is in the company of longtime friends and cohorts throughout the eight beautiful and haunting tracks. He has worked with this particular quartet"pianist Eric Legnini, double bassist Rosario Bonaccorso and drummer Andre Ceccarelli"for almost ten years, and they’re still making magic some 500 gigs later (Legnini appeared on A Prima Vista, and Bonaccorso is on that date and the 2001 self-titled release). "Playing with them is my life," the saxophonist says. "We all know each other really well. The piano and double bass are like a prolongation to my mind, and the drum is my heartbeat."

Still, the essence of Rome cannot be conveyed by jazz ensemble alone, and this is where the orchestra of top Parisian musicians (featuring the 1st violin of the Opera National de Paris) transforms a magnificent jazz date into a truly universal expression of love featuring classical and film score overtones. Bringing this element to glorious life is veteran orchestrator and arranger Vince Mendoza, who has worked a similar magic for years with jazz and pop heavyweights like Bjork, The Yellowjackets, Peter Erskine, John Scofield, and significantly, Joni Mitchell, for whom Mendoza wrote the orchestral arrangements of Mitchell classics that appear on her previously mentioned recording, Both Sides Now. Incredibly for all of its grandeur, Round About Roma was recorded in one nine hour session in Paris, with no overdubs.

"Vince wrote the arrangements, and the quartet integrated his music with our own," says Di Battista. "Playing with an orchestra is a great experience and the music is much easier for the people. It helps us keep the essence of what we’re trying to convey musically. This is the first time I have recorded with an orchestra under my name but I’ve been playing with orchestras for many years, including a whole orchestra tour with Dianne Reeves two years ago. I like the idea of music that’s simple and can be listened to easily. It’s a real challenge compared to what I did previously with my quartet or with Elvin Jones."

In an ongoing effort to convey different emotions and moods, Di Battista switches off between soprano and alto effortlessly throughout the session. His wistful soprano leads us through the elegant, dreamy atmospheres of his own composition "Tartaruga," while he leads with alto on Mendoza’s "Amoroso" to convey a rich sense of deeper melancholy. The soprano-driven "Anastasia" offers interesting moodswings between the contemplative beginning (violin solo over a dark bassline, then a classical flavored opening melody) and the livelier, swinging quartet action that emerges later. Di Battista is a longtime fan of the classic Franco Zeffirelli film Romeo & Juliet, and blends his alto with Mendoza’s caressing yet dramatic orchestrations to bring new life to the familiar Nino Rota theme. "The Other Side" begins with a dark, minor key flavor before becoming a reflection of the lighter side of the Roman experience via Di Battista’s spirited soprano jamming, a trademark lively Legnini piano solo, and the intense contrast between Bonaccorso’s double bass and Ceccarelli’s insistent hi-hat. Mendoza’s "Arabesque" is a joyful adventure, which begins as a silky soprano ballad before widening the palette to include off-meter rhythms and powerful orchestral swells. Di Battista’s warm alto drives the final two tracks, the soulful ballad "Roma Antica" and the intensely percussive, pop-flavored closer "The Next Nine Hours."

While it would be hard for anyone born in Rome and living for years in Paris to be anything but ultra-romantic, Stefano Di Battista’s birth date, February 14, 1969, ensures that Cupid will always be part of his life. He began playing sax as a teenager in a neighborhood group and says his love affair with jazz grew from his early infatuation with the acid tone of Art Pepper. But John Coltrane, Cannonball Adderley and the Italian saxophone legend Massimo Urbani are equal influences: "Urbani taught me energy, generosity, physical and spiritual commitment to music. And when I heard Cannonball at 16, I thought that was the most important turn of my life. It became a career just after that."

In 1992, Di Battista played at the Calvi Jazz Festival and was invited by Jean-Pierre Como to move to Paris, where he soon established himself at the city’s premier jazz hotspot, The Sunset. "When I arrived in Paris," the saxman remembers, "it was as if I’d been born there." He appeared frequently on the bill with Michel Benit, drummer Stephane Huchard and drummer Aldo Romano. Then came associations with cornetist Nat Adderley, drummers Daniel Humair and Jimmy Cobb, and the late pianist Michel Petrucciani, who asked Di Battista and his trumpeter sidekick Flavio Boltro, to join his new sextet.

In 1997, Di Battista released his solo debut Volare on Label Bleu, which was nominated for the Victoires de la Musique, Choc de L’Annee 97 Jazzman. He made the transition from Bleu to Blue (Note) with the recording of A Prima Vista, his well-received 1998 label debut featuring Boltro, Legnini and Bonaccorso. Di Battista’s fruitful association with drummer Elvin Jones, legendary originally for his work with John Coltrane, began with the recording of Di Battista’s well-received self-titled second Blue Note album in 2001. Jones came to Brussels to lay down tracks for "some kid" and wound up taking Di Battista on his own world tours with the Elvin Jones Jazz Machine.

For Di Battista, making music comes down to one thing: "I like the idea of simple, communicative playing that remains fluid and immediately perceptible. On Round About Roma, I wrote everything with the orchestra in mind and Vince helped me make my dream come true. The music sounds like a soundtrack so it made sense to make a play on the words ‘Round About Midnight.’ I was born in Rome and the city grew with me in my heart. Every time I leave it, something is missing to me. Being around these beautiful cities helps me communicate those special images to the listener." Show less 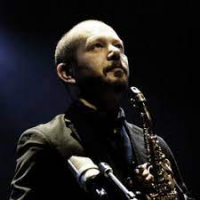 All About Jazz musician pages are maintained by musicians, publicists and trusted members like you. Interested? Tell us why you would like to improve the Stefano di Battista musician page.