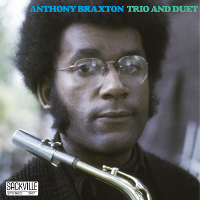 Vanguard composer and multi-instrumentalist Anthony Braxton has long inspired debate among conservative critics as to whether or not his urbane contributions should be considered part of the jazz canon; oblique strategies notwithstanding, Braxton's abstruse efforts rarely swing in a conventional sense, forever fuelling the argument. Nonetheless, Arista Records signed Braxton to a six year contract late in 1974—an unprecedented move on the major label's behalf that brought widespread attention to the maverick conceptualist's heterogeneous artistry.

Trio and Duet was cut earlier that autumn for the independent Sackville imprint, which had just begun recording intimate studio sessions by avant-garde luminaries under the guidance of musician Bill Smith. This release is somewhat atypical of the series however; an extended original composition fills side one, with Braxton on clarinet and contrabass clarinet, joined by fellow AACM member Wadada Leo Smith on various members of the trumpet family, and electronic musician Richard Teitelbaum playing Moog synthesizer. The abstract opus would eventually become known as "Composition No. 36," an episodic, impressionistic processional filled with audacious textural gambits that substantiated Braxton's standing as a radical, forward-thinking modernist.

Side two however, is an entirely different affair. Reinforcing his polarizing reputation, the second half of the program consists entirely of Great American Songbook standards, viscerally interpreted by Braxton on alto saxophone, accompanied by frequent collaborator Dave Holland on upright bass. Swinging boldly through beloved chestnuts like "The Song Is You," "Embraceable You" and "You Go to My Head," the duo's invigorating set is augmented by previously unreleased takes of "On Green Dolphin Street" and "I Remember You," which further verifies their improvisational mastery over traditional forms. Taped mere months after Braxton's unexpected Steeplechase album What's New in the Tradition (which infamously included Charlie Parker tunes performed on lumbering contrabass clarinet), these spry duets fare far better in comparison, with a steely focus on deconstructed lyricism and pliant rhythms.

Braxton's longstanding admiration for the work of cool school saxophonists like Paul Desmond, Lee Konitz and Warne Marsh is subtly evident throughout the date's latter half, which—when compared to the opener's programmatic severity—further confirms his status as an artist "beyond category." Among the many historically important and innovative recordings Braxton made in the 1970s, Trio and Duet stands out as a major signifier of his all-encompassing, artistic vision.