By JOHN KELMAN
January 8, 2011
Sign in to view read count 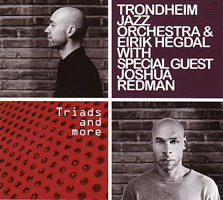 In the ever-shrinking musical sphere, it's encouraging to find cross-pollination happening between less-than-likely—or, at least, unlikely on the surface—players. Watching saxophonist Joshua Redman as a guest with Norwegian violinist Ola Kvernberg's "Liarbird" project at Molde Jazz 2010, it became clear that, as excited as the Nordic continent was to share the stage with an American jazz "star," so, too, was Redman clearly struck by the talent around him. This was not Redman's first encounter with some of Norway's best young talent, however; in 2008, Redman was an invited guest with the Trondheim Jazz Orchestra (TJO), collaborating with saxophonists/composer Eirik Hegdal for a series of concerts and the recording session that led to Triads and More.

In addition to a surprisingly large discography for such a relatively young player—still on the shy side of 40—Hegdal's a member of Zanussi Five, whose Ghost Dance (Moserobie, 2010), posits freedom and form as very comfortable bedfellows. Still, this saxophonist who focuses, like John Surman, on the extremes of his instrument's family (here, playing baritone, soprano and sopranino) has been a busy member of TJO, appearing on seven albums in the past five years, including two others devoted to his music—We Are? (Jazzaway, 2005) and Wood and Water (MNJ, 2008). Triads and More, a double-disc set which also includes a DVD with a 25-minute documentary, subtitled "making of," and an eight-minute concert performance of "Space is still the place," from the 2008 tour, positions Hegdal as a rich composer whose influences run far and wide, and well across genre boundaries.

From the enticing fanfare of "Blind Marching Band: The Opening," where Redman solos over a slowly shifting wash of horns and strings, to the knottily cartoonish "Blind Marching Band: Parade," with its directed free improv and Carl Stalling-like approach to episodic invention suggesting Hegdal's absurd sense of humor, Triads and More reveals much on a first listen, but much more with each successive spin. Trondheim's conservatory is a hotbed responsible for cultivating important Norwegian artists like trumpeter Arve Henriksen and saxophonist Hakon Kornstad, and the larger collective from which individual TJO projects are culled represents some of the country's finest—often leaders in their own right, like Kvernberg, who takes an impressive solo on the aptly titled, acoustic-driven "Country," and Jaga Jazzist's Erik Johannessen, whose expressive trombone solo helps define the cue-driven title track.

Like Kvernberg's Molde show, it's clear that Redman is no ringer on Triads and More. Sure, his name brings some cachet to the session, but despite playing throughout that is never less than stellar, Redman is hardly raising the bar for the rest of TJO's fine players, including bassist Mats Eilertsen and Farmer's Market guitarist Nils Olav Johansen. If anything, by pushing him out of his comfort zone and into new areas of rigorous composition and wild but defined freedom, TJO and Hegdal may be raising Redman's bar. Regardless, Triads and More is a vivid, stylistically unbound hour of music by one of Norway's bright compositional lights and performers, and a far-reaching orchestra clearly capable of handling anything and everything that's put in front of it.